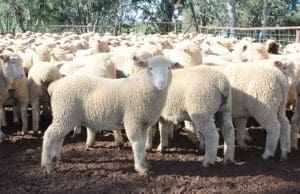 Merino lambs are filling trade supply gaps in some markets, with the National Livestock Reporting Service quoting prices as lifting $5-$7 in Dubbo on Monday. Some areas in New South Wales are still unable to transport lambs due to weather conditions hampering paddock access.

After Tuesday’s saleyard sales, the Eastern States Daily Indicators for the lamb categories were: restocker 571c/kg, down 7 cents; Merino 565c/kg, up 9c; light 587c/kg, no change; trade 649c/kg, down 1c; heavy 645c/kg, up 2c. The national trade lamb indicator is firm on 650c/kg and the national heavy lamb indicator is up 2 cents on 646c/kg.

The ESDI for mutton fell 1 cent to 397c/kg and the national mutton indicator is on 395c/kg, down 1 cent.

In New South Wales, the NLRS quoted over-the-hook lamb indicators as unchanged this week, after fairly stable saleyard conditions across the states last week. Mutton rates lifted slightly across all weight ranges, as one contributor lifted their rate.

The latest OTH rates for sheep and lambs in Western Australia and Tasmania were unavailable when this report was published.

The NLRS said the plainer quality lamb yarding had more light weight lambs, but also some good runs of trade and heavy weights.

The NLRS said the yarding included 3400 new season lambs. Quality was mixed, with quite a few secondary lambs showing the effects of the cold and wet conditions. The yarding consisted of mainly trade weights, limited heavy weights and some very good young lambs. All the usual buyers attended and the strong prices for the new season lambs continued.

Heavy lambs were firm at $145-$188 and the extra heavy lambs were $4 dearer at $175-$204. Restockers have been reluctant to buy lambs due to the reducing time they have before lambs start breaking their teeth. Medium trade Merino lambs made to $132.

It was a fair quality offering of sheep, with most weights and grades represented. Not all exporters operated. Medium weight Merino ewes with full wool sold to $126 and heavy crossbred ewes made to $126.

The NLRS said the quality of the lambs was fair to very good. The yarding included a few pens of new season young lambs. Well-finished trade and heavy weights were in good numbers and there were some secondary quality and plainer condition lots.

Demand was stronger throughout the sale. Market trends were dearer, with restockers active on plainer condition lambs they believed could be finished before cutting permanent teeth.

The sheep market was also dearer for a very mixed quality and condition penning. Heavy slaughter sheep sold up to $6 dearer. Restockers were active throughout the sale, operating on young first cross ewes and a line of full wool Merino ewes.

The NLRS said lamb quality was similar to previous sales. Well-finished and plainer lambs were penned. The usual buyers competed in a fairly similar market.

At the Deniliquin saleyards on Tuesday, the agents yarded 5565 lambs and 1570 sheep.

The NLRS said the lamb yarding was dominated by new season lines from the Riverina. The quality of the young lambs was very good, with most presenting as fresh trade weights in clean skins. The line-up of old season lambs remained very mixed and buyer interest on the secondary types, including long-woolled dry lambs and odd pen lots, has started to ease.

Demand was strongest from domestic buyers, including one of the major supermarket chains, and the best quality young lambs and suitable old season lambs recorded dearer price trends compared to the last sale a fortnight ago.

Old season lambs topped the sale at $190 for two pens of extra heavy lambs weighing over 30kg. Price results for old lambs varied according to quality and size, with the neatest lambs with short skins suiting domestic orders making up to 670c/kg. The plainer old crossbred lambs trended under 600c/kg. The Merino lambs were mostly lighter weight types, 21kg and less, which mainly sold from $93-$125. A single heavier pen made $128. A carcase weight range of 500-550c/kg covered most of the Merino lambs.

The sheep sale was dominated by recently shorn Merino ewes from station country, most of which displayed good frame and size. Mutton prices were mostly solid and similar to the last sale. The heaviest bare shorn Merino ewes over 24kg sold from $102-$109 and the general run of medium types from $70-$94.

The NLRS said lamb quality was very mixed as the tail-end drafts of old season lambs come in.

Prices for the better finished trade and export lambs were firm to a few dollars dearer than last week. Bidding for plainer types and odd pen lots of long-woolled old season lambs fluctuated to be cheaper in places. Light weight old lambs under about 18kg sold cheaper, with poor quality a factor.

There wasn’t as much weight in the old season lambs this week and they sold to $188, with the best heavy trades making $165. Results for old season lambs varied according to size and quality, with buyers favouring the shorter-skinned types displaying better fat cover. The better quality lambs recorded stronger price results than a week ago.

There was an improved yarding of sheep, with more weight and bigger runs of bare shorn Merinos. Prices were dearer, with heavy crossbred ewes making $102-$125 and the heavier drafts of Merino ewes selling from $88-$125. The good quality sheep made 350-390c/kg cwt.

The NLRS said most of the regular buyers attended the sale. Lamb quality was again mixed.

The better heavy lambs sold to $196 and the better covered, heavier trade weights made $150-$165. The well-covered lambs sold firm to a few dollars dearer, and the plainer and lighter lambs were a few dollars cheaper.

The NLRS said lamb quality was mixed and the usual trade and processors provided erratic competition alongside restockers seeking lambs to turn out. Prices were generally firm, although some categories eased slightly.

The NLRS said the usual buyers paid prices similar to last week. Lamb quality was again mixed, with the yarding ranging from plain 2 scores to good quality 3 and 4 score trade and heavy weights.

The NLRS said the lamb yarding included a reasonable supply of new season drafts, but there were not as many heavy prime drafts as last week. Lamb quality was mixed, with some very good drafts, but also numerous plain tail-end lots, which lacked demand. Live export orders were restricted to light weight wether lambs. All other buyers were active. Early sales eased slightly but improved as the market progressed. Later sales moved lower, as buyers filled orders.

All the wethers sold to restockers, with bare shorn export weight drafts making $85-$95 and long wool drafts to $120. Lighter and store wethers made $65-$114 depending on weight quality and wool length, similar to last week. Ram lambs sold at equal prices of $85-$113, as did the young rams suitable for export feeders at $55-$99. Old rams sold firm to processors for $38-$65.

Tasmania’s NLRS sheep sale report was not available when this article was published.