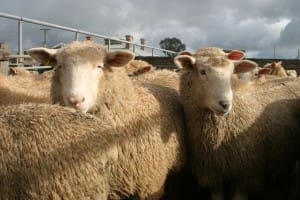 New season lamb prices fell by up to $20 across the eastern states mid-week as fewer buyers operated fully on smaller yardings in New South Wales and Victoria.

Producers passed in lambs at Wagga as the restricted demand from buyers took the Eastern States Trade Lamb Index to 457c/kg on Thursday, down 13 cents on the day before, and the heavy lamb index lost 15 cents to 458c/kg.

Mutton prices were mixed across the saleyard centres with the index finishing on Thursdayat 333c/kg, down four cents.

Meat and Livestock Australia’s National Livestock Reporting Service said most old lambs were dry in condition and competition was also weaker for the few pens of new season lambs.

Sheep prices were firm to dearer for a slightly improved selection which also attracted restocker competition in places. Light 2 score ewes made $20-$45, with medium and heavyweights $50-$80 or 250c/kg-300c/kg cwt. A line of longer-wool first cross ewes to a restocker made $94.50.

The NLRS said new season lamb numbers fell by 1000 to 14,450, but quality was excellent with more 21-25kg cwt lambs. The lighter end of 2700 pastoral Merino cross lambs from Wyvern, Hay, sold to strong competition from restockers for $59-$85.20. Old lambs were well supplied, but quality was much plainer with more holding longer wool in dry skins. The usual domestic and export buyers attended, but some did not operate fully, including on new season lambs.

The NLRS said light and medium new season trade lambs sold up to $20 cheaper, from $82-$110 or around 431c/kg cwt, resulting in several pen lots being passed in by agents. Buyers paid a premium for heavy trade lambs, 22kg-24kg, in full bloom and the better-finished lines made $110-$116 or 444c/kg cwt. The smaller number of extra heavy lambs sold to fluctuating price trends at around 406c/kg cwt.

Old lamb quality was very mixed with more longer-wool lambs in varying condition. Most well-finished medium and heavy old lambs made from $74-$110, with heavy trade lambs at around 399c/kg cwt.

Trade weight Merino lambs were in short supply, quality was fair and most categories sold up to $19 cheaper. A single pen of heavy Merino lambs estimated at 24kg cwt made $100 or around 353c/kg cwt.

The good selection of heavy and extra heavy old lambs sold to a smaller group of buyers, with prices up to $22 lower. Well-finished extra heavy lambs made $104-$129, or about 385c/kg cwt.

The NLRS said lamb quality was plain to average. A token field of buyers attended the sale as processors were keen to secure new season lambs and the small number of old lambs from southern areas were discounted. Old lambs sold mainly $10-$12 cheaper, with heavy weights most affected. Sheep prices were equal to mainly $2-$4 better.

Several pens of well-presented heavy Merino ewes and wethers sold to $94. Most Merino sheep were firm on last week, with some of the heavy crossbreds a little easier.