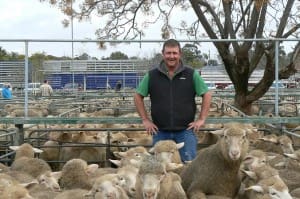 Landmark Ouyen’s Nathan Baird with 135 of R. & P. Healy’s White Suffolk cross suckers that sold for $151. The Healy’s also sold 174 Merino ewes from their Mt Dispersion Station at Euston for $95.20.

Delta Ag livestock manager and auctioneer at Wagga, Aaron Mackay, said the sale was tougher this week, with more heavier lambs, many of which up to 25kg cwt were bought by supermarkets.

“The bigger the lambs were, the most affected they were; the lighter lambs weren’t as bad.”

“But there some good lambs there; the best line-up of lambs we’ve had this year,” he said.

“The best lambs still made $176 in a tough market.

“There were a lot of lambs weighing 22-25kg cwt, with full rows of big lambs.”

“It’s the wettest I’ve ever seen it around here at this time of year for sure.”

He said the area’s turn-off was held up by weather last week, but recommenced this week.

“I don’t think there is as many lambs left out there as we all think.”

Many drafts from north-east of Wagga were marketed 4-6 weeks earlier than usual, he said.

“In the Junee and Illabo side of Wagga, their lambs don’t normally start until about now, but they’ve sold the majority of their lambs.

“They had a tremendous start to the season and their season has been good all the way, and their lambs have been better than normal.”

Mr Driscoll said the Horsham area had 12-20mm of rain on Wednesday and Thursday, which would prolong the region’s lamb turn-off, giving producers a chance to put more weight into lambs.

“Some places, particularly north and north-west of Horsham are still going to have to go, but a lot of those lambs will be light.”

He said there had been a fair bit of forward contracting for later in the year.

“But the reality is if we get rain on Sunday, it will keep the Wimmera in reasonable order.

“It has been a tough-enough, hand-to-mouth pasture year and the crops are still going quite well, so it is surprising that the lambs are as good as they are.”

Mr Driscoll said the old lambs are all but finished and the region’s new season turn-off has just started, with most due in October.

“But we are probably going to a few more lighter lambs come through than we would normally see.”

Mr Driscoll said more sheep had been sold ahead of schedule this year, with pastures kept for the weaned lambs.

“It was due to the season and they saw the opportunity to cash early and wean.

“A lot more lambs have been weaned early this year than has ever been.”

The number of producers willing to buy back into ewes later in the year would depend on whether the area received some middle and finishing spring rains, he said.

“There are some that may not take that option up, that’s the bigger concern.” 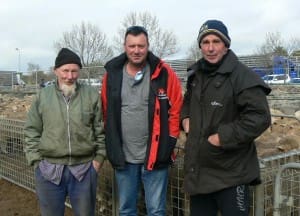 In New South Wales at the Central Tablelands Livestock Exchange at Carcoar on Wednesday, the agents yarded 3100 lambs, 450 fewer than last week, and 3900 sheep, 2325 more.

The NLRS said there were some good pens of well-finished new season lambs yarded, but old lamb quality was only fair.

It was a plain quality yarding of mutton, consisting of large lines of Merino wethers in store condition. Most lines sold firm to the processors, with the 3 and 4 score Merino ewes making $70-$105 and crossbred to $115. Properly finished wethers sold to processors for $92-$116 and restockers paid $52-$78 for wethers.

The NLRS said widespread rain on Wednesday night, up to 40mm, aided the few days of spring in the Riverina. The quality of the offering was outstanding, with more than 20,000 new season lambs penned. Old lamb numbers declined and quality varied, with many being the tail-end drafts. All the regular domestic and export buyers attended, but not all operated or operated fully.

New season lambs were well-supplied in trade weight classes. However, the sale lacked the intensity of the previous week and prices fell $10-$20. Major domestic processors were still the market drivers, but at much lower prices.

The NLRS said the new season young lamb offering increased to 7500, with the usual buyers operating keenly in wet conditions.

Quality was average, with most lambs selling firm on last week and up to $5 dearer. Heavier trade weight lambs sold to $154. Some big runs of light weight store lambs were yarded and they sold to restockers from Mallee areas and to south east South Australia at mostly $83-$95, but from $38-$70 for lighter lots. Restockers also paid from $70.50-$100 for Merino wethers. Heavy old lambs sold from $133-$148 to be mostly firm.

The NLRS said the regular buyers attended. Lamb quality was average to plain, although there were some pens of heavy trade weights. 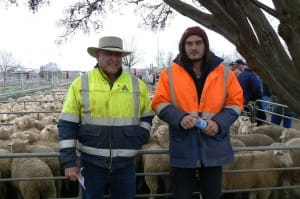 At the Ouyen sale on Thursday, Darrel and Elliot Sue from the Arumpo Pastoral Co. via Mildura sold 346 White Suffolk cross suckers for up to $143.

Young wethers were in demand and sold firm. Wether prices were strong, with processors paying $80 for the lighter wethers and $120 for the heavier weights. Restockers and feeders paid $30-$77, depending on quality and weight. Live export wethers sold from $80 for bare shorn lines to $119 for those with a fleece.

In Queensland at the Warwick saleyards on Wednesday, the agents yarded 882 lambs and hoggets, and 1075 sheep.

The top-priced lambs sold for $142 for the Springborg family of ‘Kettles Forest’, Yelarbon.

The Warwick Selling Agents said lighter finished lambs sold dearer and the heavy lambs were firm on last week’s rates in a smaller yarding. Prices remained firm for a larger yarding of sheep.