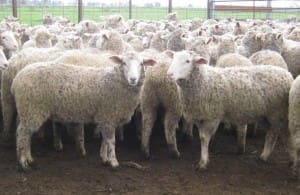 The National Livestock Reporting Service also quoted light lambs as selling strongly, with lines up to 18kg making over 700c/kg at Forbes in NSW and at the South Australian Livestock Exchange in Dublin.

Meat and Livestock Australia’s market information manager Ben Thomas said exports up to August were up one percent year-on-year and kill rates have remained quite high.

“So there is not any indication of supplies dropping dramatically.

“The Aussie dollar has also continued to weaken over the course of the year and with over 60pc of lamb being exported that puts us in a pretty good position.”

Mr Thomas said mutton was also in a strong position with the Eastern States Daily Indicator reaching 387 cents yesterday. About 95 percent of Australia’s mutton is exported.

Mutton rates were unchanged across all weight categories at 270-400c/kg.

Due to a contributor re-commencing to quote for mutton, the NLRS said no trend will be reported this week, but reported prices are 240-360c/kg.

The Western Australian rates were not available at the time this report was published.

The NLRS said it was a good quality yarding, with good numbers of prime old lambs and new season lambs. Merino lambs were also well-supplied. All the regular buyers competed in a solid market.

The NLRS said lamb numbers increased from last week’s rain-reduced offering. The quality of the lambs was mixed; comprising a fair supply of good quality young lambs along with several pens of Merino’s and some well-finished old lambs. There were more Dorpers. The annual show sale to be held next week may have held some very good quality young lambs back. The usual buyers attended and supply concerns increased demand. This created a dearer market trend in the lambs.

The limited supply of sheep created little change in the market, though a small number of well-finished heavy wethers sold slightly dearer.

The NLRS said there were 18,000 new season lambs and quality was fair. There was a good number of well-finished lambs, along with the plainer, drier types. Most were heavy trade and heavy lambs. The usual buyers competed in a fairly steady market.

The NLRS said the lambs included a good supply of trade weights and more heavy weights. Quality was good with a large percentage of well-finished lambs off crops.

The yarding of mutton was made up of a good supply of medium weights and several runs of heavy wethers. The market was stronger, with most mutton selling $10 dearer.

The NLRS said the lamb offering doubled as the supply of young lambs surged to more than 10,000. The lead drafts of young lambs were of very good quality. However, quality and carcase finish tailed off quickly, reflecting the patchy season. All the usual buyers operated.

Prices fluctuated, but generally showed a weaker trend of $2-$10 compared to the strong results of the previous week, with plainer finished trade lambs the most affected. Buyers also lowered skin values for young lambs to $7-$10 for most trade and export weight pens. The yarding of old lambs was very mixed, and while select pens of short-skinned lambs met solid demand, longer wool types and any odd and small pen lots were discounted.

The market reached a top of $167 for young lambs estimated at around 26kg cwt, while bidding for old lambs reached $172 for extra heavy exports. Young lambs dominated the market and all agents led their sales with new season stock.

The heaviest drafts of young lambs, 24-26kg cwt, sold from $154-$167. The next runs of good quality trade lambs made $130-$145. These quality slaughter lambs were estimated in a range of 590-620c/kg cwt. Plainer and lighter weight young lambs mostly made from $88-$120, and some of the light lambs suiting specific kill orders averaged dearer. There was limited restocking support at $85-$99 for young crossbred lambs and at $34-$64 for young Merinos.

The quality of the old lambs was very mixed and mostly were plain as final clean-up drafts are sold. There were sales at 600c/kg and better for select pens of shorter-skinned lambs, most of which had been supplementary fed. But secondary old lambs in the trade and export weight categories were noticeably cheaper. Some of the lighter weight slaughter lambs under 18kg cwt were firm to dearer.

Competition was strong for the sheep and all the trade and light mutton categories averaged $2-$9 dearer. There was little price change for extra heavy crossbred ewes, which sold from $92-$115 and up to $131 for a single extra heavy wether. The top pens of Merino wethers sold from $92-$124 and averaged nearly 400c/kg cwt. Merino ewes sold to $122. An average run of mutton was estimated to cost processors 370-400c/kg.

The NLRS said lamb quality was plain to average as clean-up lots of old lambs are offered. Most of the usual buyers attended, but not all operated fully in a mostly firm lamb market.

The NLRS said the much larger crossbred and Merino lamb offering failed to match the quality of last week. It sold to easing competition from the usual buyers, who included one new interstate operator. Feeders and restockers from as far afield as Penola were active on light weight new season crossbreds and mid-north agents were keen to buy the large numbers of light weight Merinos offered.

The NLRS said the yarding included 600 new season lambs. Quality was mixed, with most of the lambs lacking weight and condition. All the usual buyers operated in a market where new season lambs were dearer and old lambs cheaper.

Mutton quality varied, but some good heavy ewes were offered. Prices were cheaper on the smaller numbers as some regular buyers did not operate. Medium weight ewes sold from $70-$77. Heavy weights made $82-$106. Most ranged from 320-340c/kg cwt.

In Western Australia at the Muchea saleyards on Tuesday, the agents yarded 4650 lambs, and 4500 sheep, 2761 fewer than last week.

Live exporters were active on all wether and ram categories, with solid competition from processors and restockers. Export wether prices remained strong, but were back from last week’s highs. Wether prices were easier by $8 due to decreased competition. Export weight drafts sold from $75-$105 for bare shorn lines and to $139 for woolly wethers. Lighter weight and store wethers sold for $66-$100 to processors and restockers. Rams sold well, with the better ram lambs making $85-$127 and young drafts to live export and feeders $60-$101. Old rams sold to processors for $30-$75.