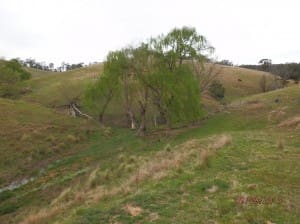 The trial was established in October 2016 to investigate options for increasing the quantity and quality of native pastures, while increasing ground cover and suppressing weed competition.

Agriculture Victoria land management extension officer John Commins said the results confirmed that with the right application of fertiliser and management to retain ground cover, the worst effects of erosion can be mitigated, especially for the north westerly facing pastures that are prone to erosion in East Gippsland.

“The application of fertiliser at both trial sites resulted in higher pasture quality, in terms of crude protein and metabolizable energy. Both protein and energy levels (pasture) currently sit at 25 per cent above that of the unfertilised (control) area.

“The Reedy Flat and Connors Hill locations were chosen to replicate the common and limiting areas found on a typical farm with regard to aspect, poor soil fertility and the presence of unimproved pastures,” he said.

“These factors were used for site selection in order to test the impact of increased fertiliser use and grazing on native pasture production, persistence and health.”

The Connors Hill trial site – midway between Ensay and Swifts Creek – is 1.74 hectares and situated on a north westerly facing slope. It has an Olsen P value (soil phosphorous level) of 4.53 mg/kg (low fertility), and predominantly Redleg Grass (Bothriochloa macra), with moderate weed infestation of saffron and scotch thistle.

The Reedy Flat trial site is 1.4 hectare, situated on a south easterly facing slope with an Olsen P value of 9.05 mg/kg (moderate fertility) and predominantly Microlaena (Microlaena stipoides), with a low weed infestation of flat weeds.

Quarterly feed testing has been undertaken at both sites to determine pasture quality. Pasture composition monitoring was also undertaken in autumn and spring to ascertain changes in plant species that may be occurring in response to the increased soil fertiliser and grazing regimes. The grazing potential of available pasture measured by the amount (kg) of dry matter (DM) available per hectare (ha) was also monitored as part of the trial.

Soil fertility testing was undertaken in autumn and spring to determine the phosphorous (Olsen P) levels in the soil.

“Native pastures are characterised by their diversity and initially 23 different species were identified at the Connors Hill site and 28 at the Reedy Flat site.

“Some native pastures are typically averse to higher levels of available phosphorus in the soil and will begin to be out-competed by other species and drop out of the system at an Olsen P level of 13 or higher. For that reason, our aim was to manipulate and sustain soil phosphorous at that level,’ she said.

“The high levels of ground cover that were maintained, even during the drought, resulted in only slight changes in the amount of broadleaf weed species at the trial sites.”

Since monitoring began, the groundcover in the treatment area at Reedy Flat was maintained at greater than 97 per cent, compared to the control area of 92 per cent.  At the Connors Hill site, end of summer groundcover was recorded at 81 per cent.

Dr Mitchell said under dry conditions, Microlaena at the Reedy Flat site struggled to thrive beyond 1600 kg DM/ha and in fact, feed-on-offer decreased due to moisture stress.

“Other options considered, to realise the potential for Microlaena, is to graze it further down to 1000 kg DM/ha particularly on the southern and eastern aspects where risk of topsoil loss is less.”