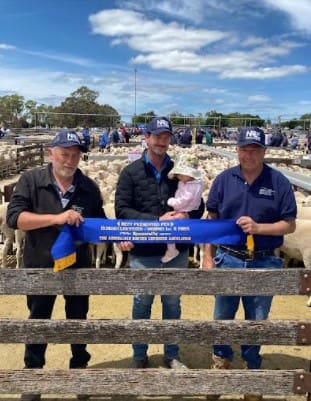 Observers said the well-prepared vendor bred lines sold well, but there was some buyer resistance over $400 for lines, especially those bought as ewe lambs and being re-sold, and lacking condition due to the tough start to the season.

Elders sold the top-priced and best presented pen of the James’ family’s Coolawang Pastoral Company, which also topped the sale last year with ewes at $472.

Coolawang principal Trevor James said after the Bendigo sale it was expected there would be some pens over the $500 mark, but the $538 price was unexpected. Mr Harvie said demand lacked some depth at prices over $400.

“We had one buyer who would normally buy a large number of ewes who didn’t and bought stock elsewhere earlier and that little bit of competition just fell out of the job.”

“The biggest factor on the day I believe is that the ewes that were presented … a reasonable percentage were just not quite to the standard they were last year,” he said. 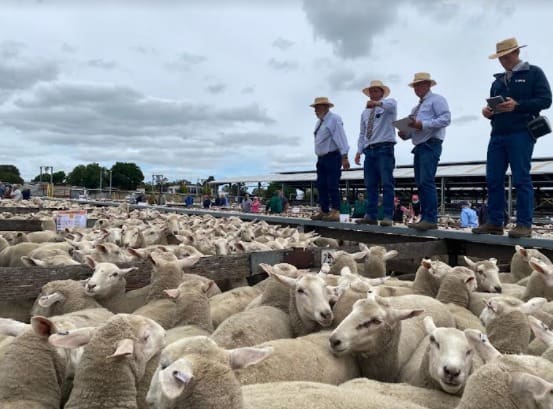 The PPH&S selling team in action at Naracoorte.

“In the last few weeks, a little bit of buying urgency has dropped out of the first cross ewe job,” he said.

“Another influence is believe the cost of replacements is now making people dabble in composite breeding.

“There are people now swinging towards putting 400-500 (first cross) ewes to a maternal composite ram, rather than having to buy in ewes,” Mr Harvie said.

“You only four blokes to suddenly want to join 2000 ewes up to composites, that’s four bidders you haven’t got in your market that normally would buy 300-400 ewes here.” The TDC selling team look for bids at the Naracoorte sale.