Most lamb indicators firm on Friday after big weekly falls 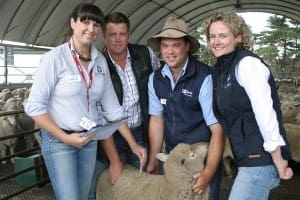 Lamb prices were firm or slightly dearer than the recent lower levels in saleyards on Friday, with all the centres selling yarding fewer lambs for reduced processor competition.

Trade and heavy lamb indicators also had big weekly falls, reflecting the current selective or reduced processor demand and declining quality of some lines being offered.

The NLRS mutton indicators gained two cents on Friday, with the ESDI on 319c/kg and the national indices on 318c/kg.

More interest in breeding stock on Auctions Plus

Auctions Plus market operations officer Tom Rookyard said sheep and lamb numbers rose this week by 20,000 head to 71,153. Breeding stock attracted most of the bidding activity, as scattered showers dotted the eastern states.

Scanned in lamb (SIL) mixed aged Merino ewes received consistent bidding across the market with an average of $107. Two lines from Wellington NSW scanned in lamb (SIL) to White Suffolks made $125 and $110.50. However, it was a line of 5-6 year-old Ridgway Advance blood ewes also SIL to White Suffolks from Bordertown SA, that topped the sale at $136.50.

The NLRS said lamb quality was similar to the previous sale, with well-finished and plainer lambs. The usual buyers competed in a firm to slightly dearer market.

The NLRS said lamb quality varied. The heavy grades were in good condition, while the remainder tended to lack finish and showed signs of dryness. Mainly heavy weights were penned, and a few trade weights and stores. Not all buyers operated and competition was sound, resulting in a generally firm market which was dearer in places.

The NLRS said a smaller and very mixed yarding of lambs and sheep was presented to buyers as the weaker markets of the past week deterred producers from selling. Demand from processors was subdued with only a small field of buyers operating. Agents passed some pens in. The market was softer, but prices were similar to the lower prices now being quoted at most southern saleyards.

The market reached a top of $150 for some small pen lots of extra heavy export lambs. The lamb yarding mostly comprised mixed lots of light trade and light weight lambs selling sold from $80-$110 to slaughter. Plainer and very small lambs sold from $49-$66, with a couple of regular restocking orders picking through the selection. Carcase prices on the plainer lambs ranged from about 430-470c/kg.

The mutton market also showed a softer trend, although a few pen of extra heavy crossbred ewes made $100-$105. The general run of slaughter ewes sold from $58-$85, with the mixed quality and small pen lots resulting in some varied carcase prices.