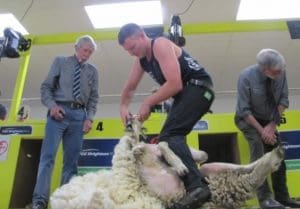 HE is based in south-west Victoria, hours from his closest international airport in Melbourne, but New Zealand shearer Ethan Pankhurst is not afraid to clock kilometres to improve his competition shearing standing.

The budding shearing champion, formerly from Masterton in New Zealand’s North Island has won 30 lower-grade finals over the years, but is unfazed by having to go without as he serves his sport’s unofficial mid-career apprenticeship trying to bust into the elite of Open-class competition.

Ethan has been crossing the Tasman regularly to keep in touch and now the 25-year-old 2015 Golden Shears senior champion could be on the brink of the breakthrough. There is a strong possibility he will reach a place in the PGG Wrightson Wool National Circuit showdown in Masterton on March 3.

With qualifying based on points for placings in heats at the New Zealand Merino Championships (fine wool), the Waimate Spring Shears (long strong wool), the national Corriedale championships (coarse wool), he’s returned home again for the lamb shearing round at the Rangitikei Shearing Sports in Marton tomorrow.

The final qualifying round is at the Pahiatua Shears (second-shear) on February 23, with the top 12 shearers from the series going to the finals at the Golden Shears the following weekend. The winner will claim a place in the 2018-2019 New Zealand trans-Tasman series team.

But, aware of the big leap from being a senior winner to an open class success and that not even the most successful in the lower grades can take anything for granted in the top grade, Pankhurst said it’s not the money he’s after.

“I flew back from Aussie to get the points for the PGG Wrightson Wool Circuit.

“I’ve got a few years before any consistency comes in.”

“It could be me one day getting the cheque, but that’s not what I’m after; I just want to win,” he said.

“It was all about points for the circuit, though a final would have been cool. Maybe next time.”

The 11 points for the day elevated his total to 17, for 8th-equal place on the leaderboard and a near-guarantee of a place in the Masterton showdown, with still two qualifying rounds to go.

With defending champion Rowland Smith not contesting the series, Southland shearer Nathan Stratford is looming as favourite to win the PGG Wrightson Wool National Shearing Circuit for a second time.

He has made the top 6 for the Saturday-night final 14 times in 20 seasons of open-class shearing and will be out to win and regain the circuit’s automatic place in the New Zealand team for the 2018-2019 transtasman series.

Previous leader Troy Pyper, of Winton, was absent from the third round at the Canterbury Show and slipped to 6th place, but with 20pts from the opening fine wool round at the New Zealand Merino Championships in Alexandra and the Spring Shears’ long strong wool in Waimate in October also all-but guaranteed a place in the premier dozen.