Merinos head up Wool Day in Melbourne after 15-year break 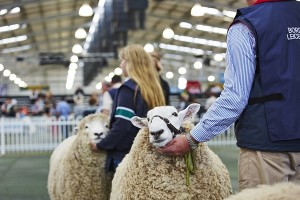 Merinos will join the British breed sheep at the Royal Melbourne show next month.

Merino sheep will return to the Royal Melbourne Show for the first time in more than a decade as part of a new initiative to restore pride in Australia’s wool industry and public consciousness of the sector.

The Merinos will be part of the show’s new Wool Day on September 26, thatwill feature wool and fibre focused activities, including re-introduction of fleece competition judging into the livestock program.

Wool can help connect with consumers

RASV chief executive officer Mark O’Sullivan said wool is important to the growth of Australia’s agriculture industries with $1.34 billion in wool exported through the Port of Melbourne annually.

“Wool is a natural fibre that comes from the land and is something we should all be very proud of,” Mr O’Sullivan said.

“The MasterChef phenomenon has most city based consumers well aware of food stories, so the RASV thought it was a good to time to reinvigorate the fibre story for our show patrons.”

Mr O’Sullivan said the RASV has strengthened engagement in the regional sheep and wool industry and was very pleased to see a small, but symbolically important contingent of Merinos return to the Royal Melbourne Show sheep competition this year.

Victorian Merino Stud Breeders Association president Frank Byrne said it is believed to be the first time in at least 15 years that Merinos will be shown in Melbourne. The show also has plans for a March-shorn Merino class, for possibly the first time in the history of the show, he said.

Interest in the March-shorn class could “snowball”, Mr Byrne said, as it preceded the annual run of on-property ram sales in September and October.

Mr O’Sullivan said the Royal Melbourne Show’s sheep competition has seen solid growth in recent years, with a 10 percent increase on 2013 entries for 2014.

“The Border Leicester feature breed will see over 100 sheep on display, with a strong return of Poll Dorsets in excess of 120 sheep.”

Merino and Heritage breeds will be on live display in the show’s livestock pavilion.

Shaun the Sheep will be there too

Key events on Wool Day will include an appearance by fashion designer, Liz Davenport, and Shaun the Sheep, the AWI fashion design competition ‘Wool4Skools’ display, Patons’ feature ‘Cleckheaton’ natural country knit range, and an opportunity to ‘Meet the Masters’ and learn to knit and crochet with the CWA.

Australia’s chief scientist Professor Ian Chubb will be the keynote speaker at an Agribusiness Leaders Luncheon that will include presentation of the ‘Emerging Leaders in Victorian Agriculture’ award by the Governor of Victoria, Alex Chernov.