DPIRD research scientist Dr Bronwyn Blake has been working on industrial hemp as a summer feed option for sheep.

WESTERN Australian research has found production gains could be made by feeding sheep industrial hemp as a summer feed option.

In the pilot project, ‘Opening the gates to hemp grazed livestock in Australia,’ the crop has shown promise as a potential high yielding, multi-purpose, summer feed option for livestock.

“The 15 (yearling Merino wethers) sheep in the house-based study in New South Wales were fed hemp pellets made in WA from the industrial hemp variety Morpeth Late, which was selected based on its slightly higher THC content to push the parameters.

“The sheep were fed three diets and five replicates per treatment and measured for digestibility, performance and carcase traits over a period of 56 days,” she said.

“The experiment showed the digestibility of dry and organic matter were higher for both hemp diets compared with the control, though it is not clear why.

“The most profound outcome was the increase in minor volatile fatty acids, suggesting an improvement in energy availability and a change in the composition of the gut microbial population, which may account for the improved digestibility,” Dr Blake said.

The Merino wethers suffered no adverse effects on feed intake or animal performance from consuming hemp stubble in the trial. Researchers found substitution of oaten straw with hemp stubble at two levels in a nutritionally balanced pelletised diet was not detrimental to feed intake, liveweight gain or carcase traits, pointing to hemp stubble as a suitable replacement for oaten straw in pelleted rations. While THC was detected in all measured tissues at extremely low levels, which would not meet regulatory requirements, Dr Blake said the results were still encouraging.

“The results suggest there is plenty of scope to develop management practices for feeding hemp biomass to ruminants, like sheep, goats and cattle, which may meet regulatory requirements for no detectable THC in animal products,” she said.

DPIRD said grazing livestock on hemp crops could lead to the accumulation of tetrahydrocannabinol (THC) from the hemp plant in the animal’s tissues and detectable levels could transfer to meat, milk or other animal products.

Australian regulations require animal products to have no detectable levels of THC residues and industrial hemp is not able to be fed to livestock in any Australian state outside approved research trials.

Researchers said the results from the first phase of the project have opened the door to further research to explore the nutritional value and channels to meet market regulations for the possible forage crop.

The project has progressed to Phase 2 to investigate the pathways to market for livestock fed hemp, including clearance rates for THC.

Dr Blake said she was excited about the next phase of the project, which could generate opportunities to use the whole hemp plant as a forage feed option for livestock.

“Phase 2 will provide valuable insight into the half-life, or breakdown, of THC in sheep and cattle and how long it takes for THC to be eliminated from various tissues in animals fed industrial hemp,” she said.

“Ultimately, this research will provide the foundation from which an industry code of practice could be developed to feed hemp forage to ruminants and create an opportunity for this useful, multi-purpose crop to be integrated into the whole farm business.”

Three diets were used in the trial and included industrial hemp biomass (leaf, flowering heads, stem; Figure 5) at 0, 28 and 56 percent with oaten chaff as the substitute forage. They were formulated to be a complete ration for weaners and to be balanced in energy and protein, with the only major difference between the diets being the proportion of hemp to oaten chaff. The diets were manufactured into 8mm pellets by a commercial stock feeds company with the appropriate license to process industrial hemp in Western Australia. Overall, there were no significant differences (P > 0.05) in the liveweight or average daily gain (ADG) between the treatment groups, although at various time points throughout the feeding period the LW of the sheep fed the hemp containing rations were significantly higher (P < 0.05) than for those fed the control (0% hemp) ration (See Figure 6). 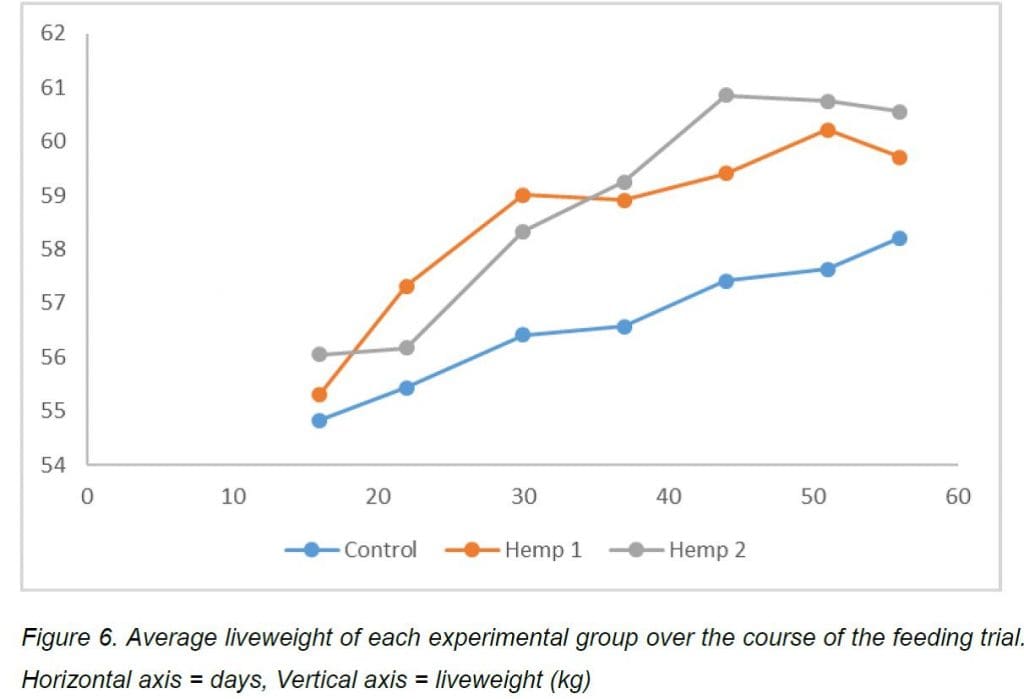 The pilot was led by the Department of Primary Industries and Regional Development, Western Australia (DPIRD) and funded by AgriFutures Australia, in collaboration with the ChemCentre and Charles Sturt University.

The pilot’s full results will be published this year and attached to the project webpage https://www.agric.wa.gov.au/crops/opening-gates-hemp-fed-livestock-australia

For more information about growing industrial hemp in WA and other projects visit agric.wa.gov.au.