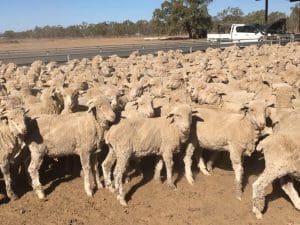 These Merino wether lambs sold for $99 at Walgett, NSW, on Auctionsplus last week.

DEMAND for Merino wethers and lambs held firm online last week as producers across New South Wales and Queensland continued to sell off surplus stock to focus on retaining ewes in the dry conditions.

Despite the AuctionsPlus offering of Merino wethers and wether lambs lifted by 2500 to 10,500, comprising about a third of total online listings last week.

He said average price of Merino wether lambs held consistent at $84, with prices ranging from $63.50 up to $109 for a line of May-June drop wether lambs at Rochester in Victoria. The 40kg lwt lambs had a 2.5cm fleece.

Walgett agent, Russell Hiscox from Clemson Hiscox and Co assessed and offered 1020 late April shorn July-August 2017 drop wether lambs for the SA Wickman Family Trust at Borgara that sold for $99.  The mostly score 2 Egalabra blood lambs averaged 41.8kg live and had been bought woolly after weaning to be finished to export weights.

Despite being on faba bins in paddock feeders, Mr Hiscox said it was becoming a struggle to get the lambs good enough for a butcher in the dry conditions. He said the Borgara-bred Merino wether lambs had already been sold earlier at weaning.

“People are making the decision to keep whatever feed they’ve got to feed females.” 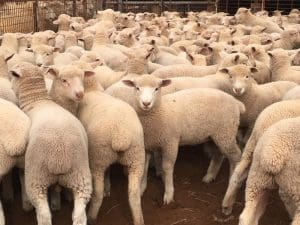 Overall sheep and lamb numbers eased by 3000 to 31,241 on AuctionsPlus last week. Mr Murphy said the tail end of the 2017 drop lambs were being listed and the first 2018-drop lambs offered, as store lamb numbers fell to 5000 head online.

Merino ewe listings fell sharply to 6600 head, down 3500 on the previous week. Supply is subsiding from restockers and breeders as the wheels are already in motion for autumn and spring lambing ewes, Mr Murphy said.

Producers offered about 3000 first cross ewes last week, evenly split between ewe lambs and older proven breeders. The ewe lambs sold from $113 to $149, with the top price paid for a line of 44kg, 10-11 month old ewes at Balldale, NSW. The proven breeders made from $140 up to $210 for a line of 1.5 year old 67kg ewes scanned in-lamb to White Suffolk rams at Bridgewater on Loddon in Victoria.