The Landmark team at Wagga Wagga selling the Yates lambs for $281.20 to equal the national record

RECORD Australian lamb prices spilled over into heavy Merino lines this week, as exporters and supermarkets paid dearly in supermarkets for quality among dwindling supplies of old lambs and a slow new season turn-off.

Exporters and domestic processors are focussed on saleyards as few lamb consignments are being sent direct to abattoirs, with prices increasing weekly.

After yesterday’s sales, the National Livestock Reporting Service reported the Eastern States Trade Lamb Indicator up 3 cents at an all-time high of 758c/kg and the heavy lamb indicator rose 11 cents to 793c/kg.

At the Wagga Wagga saleyards yesterday, Fletcher Internal Exports re-entered the market after three weeks to pay equal to the centre’s national lamb price record of $281.20 for crossbred lambs and JBS Bordertown set a new national record for Merino lambs of $235.

According to the National Livestock Reporting Service, some lines of 22-23kg lambs sold for up $10.34 a kg cwt at Wagga and well-finished trade lambs averaged 834c/kg cwt. Similar weight lambs also exceeded 800c/kg at other saleyards, including Bendigo and Dubbo on Monday, and at Forbes and Ballarat on Tuesday.

Record-priced Poll Dorset lambs were bred to grow on 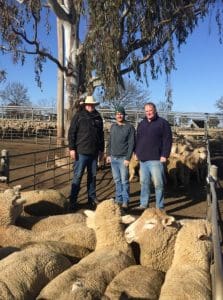 The record price paid at Wagga was for 102 Poll Dorset cross lambs sold by Landmark from R.J Yates and Co. at Yerong Creek, home of the Barwon Poll Dorset and White Suffolk studs. The lambs were estimated to weigh 35kg cwt and had a $12 skin. Another 152 Yates lambs made $273.

Barwon stud principal Mark Yates said the record-priced lambs were August-September 2017 drop and the sixth cut of their lambs out of first cross ewes to be finished on lucerne and grain to heavy trade and export weights.

This year because of the dry season, Mark said his brother Peter and his son Tom have had to pour more grain into them.

“We would love everyone to be getting that sort of money.”

Mr Yates said the Lambplan-record studs aimed to breed sheep with the genetics and conformation to produce lambs able to grow past trade weights to give more marketing options, so they keep developing until they are ready for sale.

“It was absolutely incredible; I’ve never seen a sale like it.”

Mr Cabot said the lambs that set a new Australian record for Merinos of $235 were from the Marrar partnership of Jenkins and Willis at Marrar. The lambs were estimated at 30kg cwt and had a skin with a 30mm fleece valued at $25. Mr Cabot said the price was indicative of the strength of the market. Another line of 149 Merino lambs from Boorowa producer Bill Hurley sold earlier for $232.20 to Fletchers held the national Merino lamb briefly. He said the Merino prices indicated the value of breeding Merino with good carcase qualities – “especially if you whack the wool clip onto it” with a lamb cutting $60-$70.

Peter Willis said he has been using Broula Merino rams for about 15 years in his self-replacing 19 micron flock that averaged about 6kg annual wool cut. The outclassed and older ewes, about a third of the flock, are joined to White Suffolk rams.

He said the $235 price for his March shorn Merino lambs was about $80 above his previous best price, showing that wool growers could produce valuable lambs.

“But the most this says is about the market, with over the hook Merino prices tightening right up close to the crossbreds.

“I think lamb is lamb is lamb, really, and that discrepancy only accounts for yield, and the meat is the same no matter the breed, in my opinion.”

The record-priced lambs cut $46 per head at their lamb shearing and were finished on pasture and stubble, with ad lib access to lupins in a lick feeder.

He did not expect the current price lamb levels to last, with lamb quality and supply quickly declining.

“There are just none left – the cupboard is absolutely bare – and no suckers.

Mr Cabot said some of the old lambs being marketed now have been fed $50 in grain to be finished.

Wagga agent Mark Logan from RH Blake and Co said there few good heavy lambs left on farms, but the current prices justified feeding them. He didn’t expect to see any big numbers of new season lambs until September and several producers are also selling suckers early due to poor pasture growth.

“There will be numbers of them, but how many fat ones?

“We need inches of rain, not millimetres.”