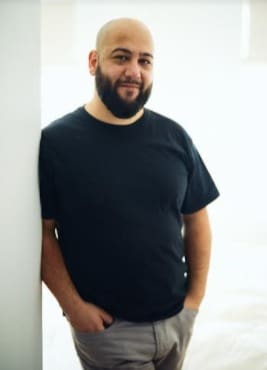 The company yesterday received the first ever accreditation for a hot carcase marbling measurement technology for beef from industry peak body, AUS-MEAT.

MEQ Probe is now the only trusted technology that has the ability to accurately measure both intramuscular fat (IMF) in lamb and marbling in beef, the company said.

The MEQ probe was accredited by Australian Meat Industry Language and Standards (AMILS) for the measurement of intramuscular fat in lamb in November last year, following AUS-MEAT approval of the lamb IMF trait’s language and standards using the probe in September.

MEQ Probe said its technology underwent stringent independent testing and has now been accredited by AUS-MEAT for accurate measurement between the 100-1200 MSA point range for beef.

Marbling or intramuscular fat is considered one of the most significant aspects impacting the eating quality and value of meat. It is currently measured using cold marbling measures where fat deposits and distribution on a cut surface of chilled beef is visually assessed by processing plant graders or grading professionals. 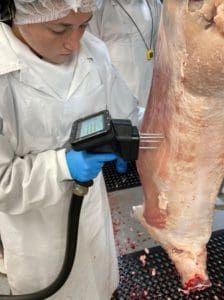 A MEQ probe being used on the GMP lamb chain.

The company said its newly accredited hot measure solution gives processors 10x the time to determine their cut design plan and saves on energy and chiller space. The hot measure prevents the need for extended chilling, which provides valuable occupational health and safety improvements in the boning room. Information about individual carcase is also provided in real-time, allowing processors to share insights quickly through the supply chain – distributors, retailers, consumers and farmers. The MEQ probe enables far greater consistency which ensures the industry can deliver on its brand promise with confidence, the company said.

MEQ Probe said the accreditation of the company’s beef marbling probe comes after it partnered with processors, Australian Country Choice (ACC) and Teys Australia to help develop the probe over the last 12 months.

“Our beef quality is a point of pride and with consumers becoming increasingly discerning when it comes to product quality, having an accurate, scientifically backed measure of meat marbling is critical. Our accreditation puts Australia at a distinct advantage and opens doors for what producers and processors can do in terms of branding and premium price targeting.

“We are beyond thrilled to have received accreditation from AUS-MEAT and to work with all those in the beef supply chain to make digitised marbling measurement the standard for the industry,” he said.

“However, MEQ Probe will continue to push the limits of our technology and work to bring even more value and understanding about the red meat we eat.

MEQ Probe is based in Gundagai, New South Wales. Its probe technology utilises spectral analysis to determine the intramuscular fat percentage (IMF) or eating quality of meat on a carcase-by-carcase basis. The innovative technology amalgamates physics, chemistry, and biology with machine learning to provide meat processors with a benchmark to improve the quality of their product.