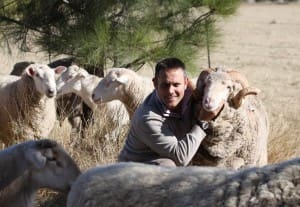 MEDIUM wool 20-micron Merino ewes joined to maternal rams have ranked on top of a range of sheep breeding enterprises reviewed by the NSW Department of Primary Industries.

DPI sheep development officer, Geoff Casburn, said the modelling compared GMs for 10 typical sheep enterprises, with varying gross margins depending on whether fodder was fed or not.

“The best results were for 20 micron Merino ewes joined to a maternal ram with a GM of $35.93 per DSE (with fodder) – that’s delivering $359 per hectare with an increase of $5.13 per DSE compared with last year.”

“Those results are due mainly to an increase in the market price for first cross ewe hoggets and an increase in prices for both Merino and crossbred wool.

“Even though this enterprise had to purchase replacement ewes, the cost was off-set by selling double the number of ewe hoggets and a similar number of cast for age ewes,” Mr Casburn said.

A self-replacing 18 micron wool enterprise had the next highest GM increase at $4.17 per DSE, which was driven by a rise in wool value and the sale value of excess ewes.

The 20 micron Merino and first cross ewe enterprises joined to terminal rams continued to perform well, even though they experienced a reduction in GM of 13pc and 8pc respectively, due mainly to the higher cost of replacements.

Enterprises with the highest GMs also had the highest costs per hectare, which were offset by higher returns.

“A 20 micron self-replacing Merino enterprise with 25 percent of ewes joined to a terminal ram performed surprisingly well and it appears to cover all bases – breeding replacements, wool production and sale of prime lambs,” he said.

“The average performance of many sheep enterprises in the last five years was similar to a 2015 wheat enterprise with a 3-tonne grain yield per hectare and grain price of $240 per tonne.”

GMs are calculated based on running 10 DSE per hectare, taking account of variable costs directly associated with each enterprise and which does not include fixed costs such as labour, machinery or livestock inventories.

For specific sheep gross margins information click on a link