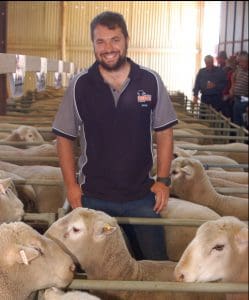 The youth ambassador for the Sheepmeat Council of Australia said he hoped to have a continued leadership role in the industry. The other new board nominees are Adelaide Hill beef producer Tom Hampton and pastoral Charbray breeder Gillian Fennell.

Successful candidates will be announced at Livestock SA’s annual general meeting on Friday, September 16, at Hahndorf, held in conjunction with the inaugural SA Cattle Producers Forum.

Livestock SA chief executive Andrew Curtis said it is the third year in a row which Livestock SA has received more nominations than positions available on the board.

“It’s a healthy sign that there is significant interest in the advocacy work of Livestock SA on behalf of producers.

“All members of Livestock SA are encouraged to vote and any producer in South Australia who is not yet a member needs to quickly join so that they can also vote,” Mr Curtis said.

Ballot papers and profiles of each candidate will be posted to members this week. The closing date for voting is 5pm on Tuesday, September 13, 2016.

The biographies of each nominee are available online.