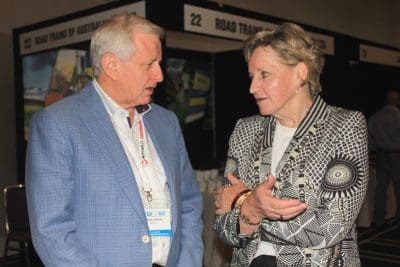 “At our AGM two days ago, there was unanimous endorsement by the membership to establish the LGAP company and to commit to working to strengthen the supply (chain) and traceability – to put more responsibility onto the facilities themselves and to develop a global standard,” he said.

“The point made by (former Livecorp chairman) David Galvin in a speech yesterday, about lobbying the international trade organisations, the EU in particular, to themselves be requiring their own exporters to embrace the sorts of standard we do, is not only good for animal welfare, it levels the playing field in terms of competition.”

Mr Crean said the trade should be taking up the issue of other exporters adopting animal welfare standards with the Australian Government.

The ALEC chairman said the council would now write to the Federal Government about its LGAP decision and then engage with industry service provider, Livecorp, about undertaking research.

“We realise that there has to be improved control and traceability standards, but that they are going to vary from market to market.”

“It is built on the principals of ESCAS, but it is taking it in a global context,” he said.

Mr Crean said ESCAS puts all the responsibility on the exporter, and this still stayed.

“But we want to use a better control and traceability system to also put responsibility on the facility.”

According to the LGAP website, the facility-based global conformity assessment program for livestock exports aims to protect the welfare of animals, fostering continual improvement and the attainment of best practice. Unlike the government-regulated Export Supply Chain Assurance Scheme, it is independent of government, and is not supply chain-based.

Beef Central was unable to get government comment on the LGAP support by exporters, but according to the LGAP website, the program is expected to be recognised by government as an alternative pathway for live export welfare assurance, similar in approach to other assurance programs recognised by the Australian Government in meeting regulatory and policy objectives.

It will follow guidelines from the World Organisation for Animal Health (OIE), the International Organisation for Standardisation (ISO) and the World Trade Organisation (WTO) which might facilitate greater acceptance of the Program in markets that have perceived ESCAS as a sovereign impost.

In May this year, Australian livestock exporters welcomed confirmation in the 2017/18 Federal Budget of $8.3 million over four years in Commonwealth funding to support the future implementation of the Livestock Global Assurance Program. ALEC chief executive officer Simon Westaway said then that LGAP was not self-regulation, and the Australian Government would still remain the regulator of the Australian livestock export industry.

“LGAP will be a regulatory enabler at arms-length from industry, run by a program owner under a mixed-membership model,” he said.