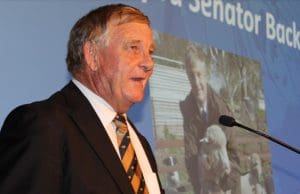 The Department of Agriculture and Water Resources has appointed Dr Back as the independent chair of the technical advisory committee to conduct the review of the Australian Standards for the Export of Livestock.

Dr Back is a former Western Australian Senator and graduated in veterinary science at the University of Queensland in 1971. He has been a consistent supporter of the live export trade. He was also the architect of legislation — Criminal Code Amendment (Animal Protection) Bill 2015 — designed to thwart extended undercover activist campaigns against livestock cruelty.

ASEL is mandated by the Federal Government and regulates the handling of animals in Australia’s livestock export supply chains, from pre-export preparation to the point of discharge in the importing country.

The committee was appointed last week. Deputy Secretary at the Department of Agriculture and Water Resources, Malcolm Thompson, said the ASEL were critical to the export of Australian livestock.

“We want to maintain Australia’s reputation as a world leader in animal welfare standards and as an ethical and reliable trading partner for quality protein.

“The ASEL standards have underpinned very strong animal welfare outcomes, with the mortality rate for Australian livestock exported by sea on a downward trend since 2006.”

“This committee will work closely with a reference group of key stakeholders, including Australian Livestock Exporters’ Council, the RSPCA, livestock producer bodies and the Australian Veterinary Association to ensure the standards consider livestock industry innovation and development, along with the latest animal health and welfare research.”

Australian Livestock Exporters’ Council chief executive officer Simon Westaway said the appointment of Dr Back and the other committee members was a positive step in the review process.

“This review is strongly supported by ALEC because it will ensure ASEL reflects new technology and research and that existing high industry standards continue to be aligned with community expectations,” he said.

“ALEC wants ASEL to remain a benchmark which promotes a sustainable and growing live trade for Australia.”

The committee will ultimately provide recommendations to the Department of Agriculture and Water Resources. It will be supported by an ASEL reference group comprising representative bodies including ALEC, the RSPCA, the Australian Veterinary Association and livestock producer groups.

Mr Westaway said Australia has been long recognised as the global leader in animal welfare and ASEL is regarded as the international gold standard in terms of the global livestock export trade.

“But exporters are never complacent about the need for ongoing improvement.

“The standards governing the live trade must continue to represent regulatory best practice and support our long-term sustainability.”

Committee members are appointed for two years and will commence their work immediately, with public consultation to start in early 2018.

More information, including full biographies for the committee members, is available at http://www.agriculture.gov.au/animal/welfare/export-trade/review-asel/tac-review-asel