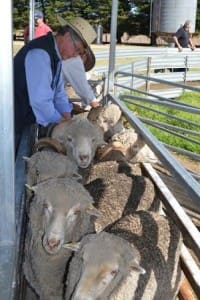 “They are highly productive fine wools,” he said.

Mr Toland and his fellow judge Michael Collins said the calibre of entries, this year open to properties in the Gippsland region, was outstanding.

“There is a good future for the Merino, there was a lot of good sheep here today.

“The scores were very close and we did a lot of head-scratching to get to the final decision,” Mr Collins said during Friday’s presentation, after a tour of the entrants’ properties.

The Davidsons won a cash prize of $1500 from the RASV for winning the award and the second prize of $300 from the Gippsland Sheep Breeders Association went to DJ Boland and JM Peavey of Giffard. The GSBA’s third prize of $200 went to JCJ and LM White of Bairnsdale and the encouragement award of $200 from Gippsland Merino Breeders went to Millring Pastoral of Toongabbie.

Mr Toland said some of the flocks are already producing all-purpose Merinos for wool and meat production. Some of the entrants told the judges they were able to sell Merino wether lambs and grown wethers for $100-$120, which was good money when combined with wool returns, he said.

The Davidsons’ entry in the award with seven other flocks has shown a willingness to put their flock up for comparison and benchmarking within the region. They have also been benchmarking their flock against sheep nationally as participants in the Peter Westblade Memorial Merino Challenge for the past two years. 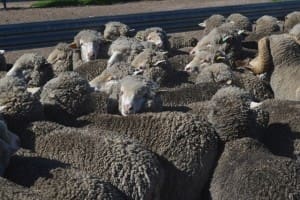 Last year the Davidson sheep ranked well for their wool return performance and “middle of the range” in the meat calculations, Mr Davidson said. The challenge results indicated an improvement in frame size could help the flock’s meat profitability and with the dispersal of their main ram stud, Middleview, last year, they have started a trial of rams from several new studs.

“Our emphasis has been more on wool, but now we are trying to build our frame size up with the wool cut,” Mrs Davidson said.

The Davidsons have used Middleview blood rams for 25 years and introduced Hazeldean rams for the past four years, with the goal of producing a healthy, fine wool Merino sheep with a soft, heavy-cutting fleece of 16-18 microns and uncomplicated large frame. 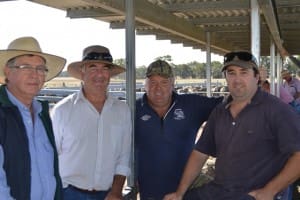 Gippsland Flock of the Year judges, from left, Phil Toland and Michael Collins, with winners Garry and Scott Davidson.

The farm is operated by Garry full-time and son Scott part-time. The ewe flock of 2800 is shorn in May-June prior to lambing to avoid a mid-break in the staple. Wethers are shorn December-January to avoid flystrike and grass seeds. Cull Merino ewes are joined to Border Leicester rams from their own stud to produce first cross prime lamb mothers. Mature ewes generally mark around 90 percent of lambs. They run about 4500 wethers until they are about 5.5-years-old in the rougher paddocks.

“I like the wethers – they are a pretty good money spinner I reckon.”

The Davidsons run their sheep over 1441 dryland hectares and the property has an annual rainfall of 625 millimetres with soil types including sandy ridges, black sandy loams and red gum plains.

Mr Davidson said the dispersal of the Middleview stud led him to select rams from three other studs – Grassy Creek, Woodpark Polls and Pastora – to compare them with Middleview ram progeny on their property.

“We’re going to identify the lambs with tags and see which ones suit our area and we will probably run with that.”

“So we’ve gone to the studs he was using their blood and we’ll see how they go.”

He hoped the average flock micron might not go beyond 18 microns with the new rams.

“We’ll hopefully get a bigger plainer bodied sheep that’s got a bit more meat value at the end and a bit more fertility.

“We’ve got to keep the ease of care with the wool.

“We get a lot of rain the summer so we can’t afford to get any bad color in our wool going forward for the flies and stuff.”

The McLennan-McColl Flock of the Year award was presented by the RASV in partnership with Merino Victoria, completed judging on Friday with ‘SF & RK Davidson’ owners Garry and Kaye Davidson named the 2015 Victorian Flock of the Year winners.

Mr Davidsons said and the competition gave them an indication they were “travelling in the right direction” with breeding and management.

“I love breeding Merino sheep — I’ve done it all my life and I know nothing else.

“It’s terrific to have this bestowed upon us.”

The results were announced on Friday evening at the property of John and Leanne White, third place-getters and final stop on the judging tour.

Recently renamed in honour of two of the Merino industry’s most well-respected, wool producer, Neil McLennan and sheep classer, Keith McColl, the award celebrates and assists with improving the quality of Victoria’s merino ewe flocks.

Competition will move to north-east Victoria in 2016

RASV CEO Mark O’Sullivan said the organisation was delighted with the outstanding results of the award and confirmed the event would travel to north-east Victorian 2016.

“The field of entries from the Gippsland region this year was impressive and RASV congratulates Garry, Kaye and Scott Davidson on their achievement,” said Mr O’Sullivan.

“This competition is part of RASV’s commitment to showcasing Victorian agriculture and supporting regional events and we look forward to bringing the 2016 McLennan-McColl Flock of the Year to north-east Victoria in 2016.”