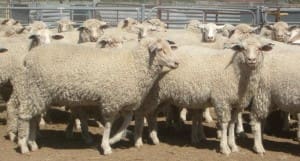 But with some trade and export processor buyers not needing to supplement direct supplies or bidding less for the quality offered, prices for trade weight and export lambs fluctuated firm to cheaper across the markets.

The ESDI for mutton gained 2 cents to close on 312c/kg and the national indicator is on 311c/kg.

The NLRS said it was a pretty good quality yarding, with some good runs of heavy weight and trade weight lambs and a fair selection of lambs suited to restockers. Not all the regular buyers operated in the cheaper market.

Most weights and grades were represented in the mixed yarding of mutton. Light and medium weight ewes and wethers were $1-$3 cheaper and heavier weight sheep were firm. The 2 score ewes sold from $29-$65, while the better 3 and 4 score crossbreds made $55-$94 and the Merinos made to $89. Properly finished Merino wethers sold to $99.

The NLRS said lamb quality slipped. There were reasonable numbers of light, medium and heavy trade weight lambs. The market lacked the intensity of last week, with prices fluctuating as the market progressed.

Hamilton’s trade lambs up to $8 cheaper

In Victoria at the Hamilton saleyards on Wednesday, the agents yarded 9128 lambs, 5390 fewer than last week.

The NLRS said lamb quality was very mixed, with no extra heavy weight lambs. The best covered lambs suitable for the trade were off summer crops and supplementary fed. Overall there was significantly less weight in the lambs. The usual buyers attended, but not all were operating fully, with some only observing the market.

The sale showed an easier trend with the heavy and medium trade weight lambs ideal for slaughter mostly $3-$6 cheaper and some up to $8 cheaper.

At the Hamilton saleyards on Thursday, the agents yarded 12,165 sheep, 6772 fewer than last week.

The NLRS said there was a fall in quality, with more light weight sheep. There were still some good quality line-ups of Merino and crossbred ewes, with some drafts of heavy and medium Merino wethers that provided interest and created competition. The regular sheep buyers followed the sale and prices remained steady in a stronger market.

Heavy sheep were $4-$6 dearer, medium weights $2-$7 better and lighter lines sold $4-$7 dearer. Restocker activity was limited to a few pens from local agents and they paid $61 for young wethers and $76 for crossbred ewes.

In South Australia at the Mt Gambier saleyards on Wednesday, the agents yarded 1483 lambs, 577 fewer than last week, and 307 sheep, 434 less.

The NLRS said a similar quality lamb yarding was offered to a small field of processors and some restockers.

The NLRS said a mixed quality sheep and lambs sold firm, with the well-presented lines selling to strong competition. All the usual buyers attended and graziers bid on store lines.

Mutton quality was mixed, with lighter ewes making $25-$55. Light ewes sold to slaughter made $36-$59 and better 3 score mutton with a 5cm fleece made $52-$93. Restockers paid $25-$67 for Merino ewes depending on quality. Light plain older wethers sold to restockers and feeders for $20 and better quality lines made up to $95. Wethers sold to live export for $88. Processors paid $100 for young rams and $5-$10 for old rams. Feeders and graziers paid from $20 for light rams up to $87 for the better heavier rams.

In Queensland at the Warwick saleyards on Wednesday, the agents yarded 1021 lambs and hoggets, and 169 sheep.

In a smaller yarding of sheep and lambs, the market was fully firm on last week’s rates, with the top-priced lambs weighing 61.8kg lwt making $149 for Texas producers J.T. & S.K. McManus of ‘Oak Park’.

At the northern Tasmanian saleyards at Powranna and Killafaddy on Tuesday, the agents yarded 650 lambs, 600 fewer than last week, and 800 sheep, 400 less.