The benefits to Australian wool growers increasing certified non-mulesed Merino and crossbred wool supplies became obvious this week as the auction market reached its highest benchmark level for the season this week.

“At the moment we are struggling against countries like New Zealand and South Africa that have ceased mulesing.

“They have been reaping the benefits for many months now, if not a couple of years, and are ahead of the curve in terms of price,” Mr Symes said.

He said by lifting non-mulesed wool production, Australian growers stay in tune with brand partners, “so I would say it is increasingly a good strategy.” 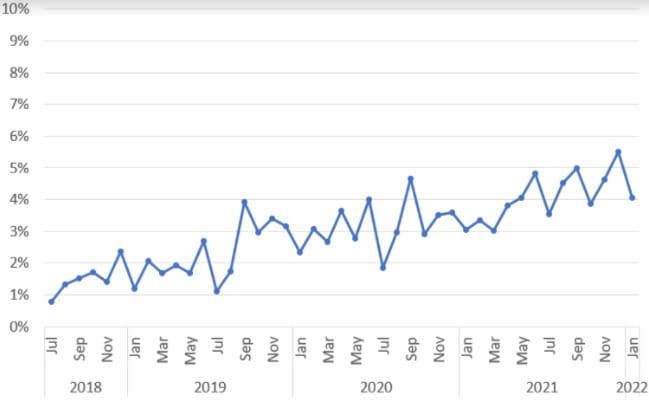 This chart shows the positive trend by percentage, by month, in non-mulesed Merino wool offered at Australian auctions with integrity scheme certification. It excludes wool of NZ origin. Source – AWEX.

Mr Symes said premiums for Responsible Wool Standard Merino clips were about 120-150cents/kg clean, while crossbred RWS price premiums have not been as significant.

“Demand for the crossbreds is coming mainly from China and India, and prices are moving in 20-cent increments, whereas the (RWS) Merinos are anywhere from 120-150 cents a kilogram clean above the spot market.”

He said there is now significant market demand for RWS wool, but demand for wool generally was improving.

“We are hearing from our brand partners and there is constant enquiry for significant volumes of RWS wool in both weaving types and the shorter hand-knitting types, and processed and carbonised wools as well.

“That gives us great confidence that if we had more (RWS) volume, we would be able to sell more wool.

“We are actually just meeting the demands of the market and the growers who get accreditation and get their wool into the market will reap the benefits.”

“There is a lot of enquiry coming at reasonable levels which is encouraging.”

He said the increased demand for RWS wools is coming mainly from China and Europe, on top of the normal US demand.

“But the market generally is being driven primarily by Chinese indent demand in good volumes and greasy trading has been quite healthy in recent weeks.

“Usually the trigger point in the indicator is when the US conversion in the EMI gets around US1000 cents and the market starts to tip over,” he said.

“But we’ve pushed through that level and might be heading into uncharted waters.”

“We’ve seen more order comings from our own guys, we’ve got a mill in China and are able to trade RWS wools and the Chinese indent buyer Sequoia has been a very strong supporter of RWS wools from Australia.

“This is built on textile export orders out the other side which have been healthy and quite steady, and has created a bit of an emptying of the greasy wool pipeline.”

The current demand is a continuation of the flurry of Chinese indent demand before Christmas, despite shipping and containerisation being still slow, he said.

Mr Symes said the greasy wool market is operating at different price levels, with AA (mulesed with pain relief) and non-declared clips sitting 30-40 cents below non-mulesed and ceased mulesing lines, “and then RWS goes to another level of incentives based on demand and quality.”

“It all boils down to if we can provide enough quantities of RWS-accredited wool in the specifications for spinners and weavers to fit their normal types, then the future is bright and healthy.”

“But having said that we know geographically and climatically we know that growers struggle with the season we’ve had, and the weather and humid conditions are causing enormous problems with flystrike.

“So, we are not trying to tell farmers how to run their businesses, but if the conditions suited and they were able to head down that (non-mulesed) path I’m sure they will reap the benefits in the years to come, in a shrinking pool of Merino wool.”

He said now that wool is getting a better hearing on the world stage in terms of its sustainability, the fight against fast fashion and climate change, he thinks there is a healthy future for the next generation of producers.

“The science has made the wool industry attractive again.”