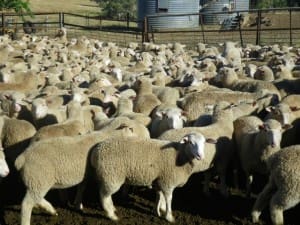 Lamb prices closed on firm rates in saleyards and on AuctionsPlus last week with buyers paying up to 528c/kg for store lambs.

Only mutton prices failed to make gains nationally last week, with all lamb category rates lifting. The biggest weekly gains were made in the Merino, trade and heavy lamb categories. Mutton rates lost 16c/kg cwt in the past week.

Bidding strong for lambs on AuctionsPlus

AuctionsPlus market operations supervisor Anna Adams said sheep and lamb listings continued to slow last week, dropping 7046 to 40,756. About 60 percent of the week’s listings were lambs, with good numbers of store lambs from SA and Victorian.

Bidding remained strong for lambs on AuctionsPlus with light lambs weighing 26-28kg liveweight making from $49-$66 and the 32-34kg lwt lambs selling for $72-$80.

The heaviest lines of store lambs at 39-43kg lwt sold from $80-$95.50, equivalent to 455c to 528c/kg dressed weight as gauged by the assessors. Most bids came from southern NSW and Victorian restockers. Consignments included lambs from Broken Hill and Wellington in NSW, now heading south.

Merino wethers and wether lambs drew bidding from both processors and restockers, Ms Adams said. Wether lamb numbers were similar to the previous week and prices rose by $8-$12. A line of six-month-old Hazeldean and Centreplus blood lambs with a 1.5’’ skin from Boorowa topped the Merino lamb sales at $63. Wether hoggets with a half inch skin cleared from $65.50-$67.

The NLRS said lamb quality was mixed with the yarding comprising well-finished lambs in top condition and more secondary drier lambs. Mainly trade and heavy weight lambs were penned, with more store lambs. All the usual buyers operated, except for one, and competition was good, resulting in a firm to slightly dearer market.

The NLRS said lamb quality was similar to previous sales, with well-finished and plainer lambs penned. There were more Dorper lambs available. Not all the usual buyers attended and the market was cheaper.

Competition for lambs was keener but sheep prices fell before the usual processors and some extra restocker enquiry. Lambs were generally $3-$5 dearer with some restocking sales more, while sheep mainly sold $5-$10 cheaper. Lamb quality was average to good and these included light and store lambs through to the heavy export weights, up to an estimated 27kg.