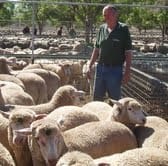 In Victoria, the NLRS said there were some downward adjustments to over-the-hook lamb rates this week, with trade weight lambs back an average of 10c/kg cwt. Light and medium mutton rates increased slightly, while the average heavy weight mutton carcase rate declined.

In South Australia, the NLRS said over-the-hook lamb rates were slightly lower, with all categories back an average of 5c/kg cwt this week. Mutton rates remained unchanged.

The NLRS said there were some good lines of trade and heavy weight new season lambs, heavy old lambs, Merino lambs and hoggets.

The NLRS said quality lifted, with a better selection of young lambs in good condition in most weight categories. The old lambs were generally plainer and in smaller lots, and included a fair percentage of Dorpers and Merinos as seasonal consignments decline.

Sheep quality was good overall. There were plenty of lots showing good weight and condition as spring pasture growth provides ideal conditions for producers to turn off surplus sheep following shearing. The market was solid with prices mostly firm to slightly cheaper. Medium and heavy ewes ranged from $65-$85, while a fair selection of wethers made $66-$96. Most of the better covered sheep averaged 290c/kg-315c/kg cwt.

The NLRS said excellent quality young lambs made up the bulk of the offering, with plenty of lines above 22kg cwt. Old lambs were in shorter supply and quality was mixed, with very less buyer interest in this category. A full field of domestic buyers attended, however not all major domestic or export buyers operated fully, causing rates to fluctuate during the sale.

Prices were erratic for the good numbers of new season trade lambs, particularly for lines showing dryness or seed infestation. Light trade weight lamb were in reasonable supply and increased restocking orders helped underpin prices, with the better-finished light lambs to slaughter averaging $100. Medium and heavy trade lambs were in greater numbers, with increased supplies of shorn young lambs and prices were generally $2-$3 cheaper. The heavy trade lambs averaged 455c/kg cwt. Trade weight young Merino lambs were in limited numbers and the better-finished drafts suitable for the trade made from $88-$109.

Heavy and extra heavy young lambs sold to weakened competition due to a few major export buyers operating sporadically. Heavy lambs lacked the weight of the previous sale, with prices up to $4 cheaper. Heavy export lambs sold from $117-$133, with the extra heavy lambs averaging 428c/kg-447c/kg cwt.

Lambs suitable to turn-out were well-supplied and met much stronger demand, with several buyers purchasing lambs above 18kg cwt. Store orders were in place from Goulburn, Bendigo, Ballarat, Griffith, and Albury, as well as the local area. The better quality second cross lambs returning to the paddock sold from $86-$101.

Mutton quality was mixed, with all weights and grades represented. Merino ewes suitable for the trade were in reasonable supply and sold to steady demand, with prices mostly firm to $2 cheaper and averaging 308c/kg cwt.

Heavy sheep were in good numbers and bidding was strongest from northern exporters for heavy Merino wethers, with prices generally firm to $7 dearer. Heavy wethers made from $91-$118, averaging 356c/kg cwt. Heavy crossbred ewes were also well supplied and sold from $78-$98 to average 303c/kg cwt.

The NLRS said lamb quality was average, with a reasonable supply of trade weights and heavy lambs available for most of the regular buyers. Lambs generally sold around firm on quality, with some of the plainer trade and heavy lambs a few dollars easier. Restockers were active and paid from $79-$102 and from $47-$65 for the lighter weights. Restocking lambs sold into the Mallee, local and north east areas. A small pen of donated old lambs sold for $155 and a pen of ewes sold to $100.

The NLRS said not all buyers operating fully on the mutton yarded. The yarding included all weights and grade, with most sheep selling to an easier trend, back $5-$10 and more in places. Restockers and feeders paid from $58-$80.50 for Merino wethers and $60.50 for a pen of young Merino ewes.

The NLRS said lamb and sheep quality varied, with the mutton yarding including ewes and some excellent lines of wethers.

One pen of new season lambs sold for $110, with an estimated weight of 23kg cwt. The sheep came back a further $5-$8 due to two export buyers not operating, limiting competition across all weight ranges.

Mutton rates were $20-25 easier and ranged from 200c/kg-240c/kg cwt. The next sale at Ouyen Livestock Exchange is Thursday October 23. The sale scheduled for October 16 has been cancelled due to lack of numbers.

The NLRS said mutton quality was back on last week, with more lighter conditioned bare shorn ewes offered and most lambs being light weight and in store condition. Wether numbers increased slightly. Competition increased across most categories, with the return of live export and additional lamb and ewe buyers.

Heavy lambs sold to a top of $112. Old lambs to the trade also improved $8, with most trade weight sales making close to 420c/kg cwt. Light store lambs were dearer, with prices up by more than $5 for most. Better crossbred store lambs made from $60-$79, up $6, with plainer and Merino drafts making $35-$60.

Ewe prices remained close to firm, with the reduced weight, wool length and quality having little impact. Heavy weight drafts were equal, with prices from $64-$82 or around 265c/kg cwt. Large supplies of processor mutton sheep, 18-24kg cwt, made from $50-$75 to be equal, with very light ewes from $15-$50. Wether sales remained firm, aided by live export competition. Heavy weight wethers made from $72-$92, with the live export drafts ranging from $65-$80 bare shorn. Lighter weight and store wethers to export feeders and restockers remained close to firm, with prices from $45-$78. Ram lambs made to a top of $74.50, with younger live export and feeder drafts from $30-$65. Old rams again made from $5-$25.