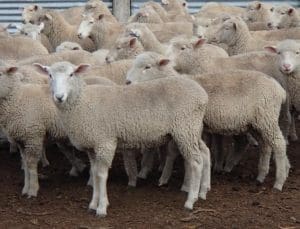 Quality trade and heavy lambs maintained and slightly increased their value in some centres, but prices fell for secondary drafts which made up most of some yardings.

Several processors are now into their seasonal maintenance shutdown periods as lamb and sheep numbers decline, and fewer quality trade and heavy lambs are available.

The NLRS said store lamb demand was limited, but some processors bought lambs at Wagga to background on grass for later slaughter. Quality export weight lambs were least-affected by the price correction in some centres.

The ESDI and national mutton indicators finished the week on 377c/kg, down 2-3 cents.

In New South Wales at the Central Tablelands Livestock Exchange at Carcoar on Wednesday, the agents yarded 7000 lambs, 5750 fewer than last week, and 2500 sheep, 250 less.

The NLRS said cold wet conditions reduced the lamb yarding. Most were trade lambs, along with odd pens of heavier weights and the usual light weights.

The NLRS said the yarding declined due to wet conditions, which have impacted on the condition of lighter weight categories. The quality across the trade and heavy lamb offering was very good with most lambs supplementary-fed or finished on lucerne.

Not all export buyers operated fully or competed in the sheep run, while major domestic processors were selective, wanting lambs with finish and shorter skins. There were limited store orders, but some processors bought lambs to background on grass. Grain-fed trade lambs attracted premium prices as major domestic buyers bid on high yielding pens.

Despite good numbers of supplementary fed heavy and extra heavy lambs, the yarding lacked the weight of previous weeks. Heavy lambs sold from $165, before gaining momentum to average 659c/kg. Extra heavy lambs sold to stronger demand, with one processor dominating the market on lambs weighing above 30kg. Generally prices were unchanged to $5 dearer at $168-$229.20, averaging 633c/kg.

The mixed quality offering of mutton included all weights and grades. Heavy Merino ewes in full wool attracted strong bidding to sell to $150, but most sales were $10-$20 cheaper. Heavy crossbred ewes sold $24 cheaper to average 332c/kg. Trade sheep sold to weaker demand at $65-$116, or 350-399c/kg. Plain light weight ewes scanned in lamb were keenly sought by restockers for $50-$106.

The NLRS said lamb quality was good to average, with drafts generally showing less cover. Some very good trade weight lambs were offered. There was one less domestic and export buyer and the usual processors showed less urgency and were more selective.

There were some good quality lines of Merino wethers and crossbred ewes. Sheep prices were overall firm to slightly dearer, with the most improvement in the light-medium weights. Heavy sheep prices were cheaper in places.

The NLRS said most of the usual buyers operated on the average quality yarding and lambs generally sold from firm to a few dollars easier than last week.

In South Australia at the Mt Gambier saleyards on Wednesday, the agents yarded 1710 lambs, 121 more than last week, and 204 sheep, 65 more.

The NLRS said the usual trade and processor buyers operated on the mixed quality offering with its wide range of weight, type and skin length. Prices eased on the previous week.

In Western Australia at the Katanning saleyards on Wednesday, the agents yarded 1851 lambs, 1300 fewer than last week, and 1500 sheep, 500 less.

The NLRS said it was mixed quality yarding of sheep. Lambs dominated the yarding and heavy crossbreds sold to $122.

In Queensland at the Warwick saleyards on Wednesday, the agents yarded 1846 lambs and hoggets, and 374 sheep.

In a larger yarding of both sheep and lambs, the lamb market eased for light and unfinished lambs. The mutton market was fully firm to a shade dearer. Emu Vale producers L.W. and D.F. Kable sold the top-priced lambs for $160.