Lamb prices turn around on lower supply and quality

Lamb yardings dropped dramatically at saleyards in New South Wales, Victoria and Western Australia in the last two days – including by 27pc in Carcoar and 24 percent at Wagga; by 44pc at Horsham and 25pc at Hamilton, and by 42pc in Katanning.

Sheep yardings have fallen also, though only by 14pc at Wagga and 18pc at Carcoar in NSW. In Victoria, the drop in saleyard mutton supply has been more dramatic, by 52pc at Horsham and 35pc at Hamilton. Katanning’s sheep offering fell by 30pc this week.

The ESDI for mutton finished down 1 cent to 287c/kg and the national indice improved 1 cent to 288c/kg.

In New South Wales at the Central Tablelands Livestock Exchange on Wednesday, the agents yarded 7350 lambs, 2750 fewer than last week, and 5100 sheep, 1100 less.

The NLRS said it was a fair quality yarding, with some top heavy weight lambs and well-finished trade weight new season lambs in fresh condition. There were also a good percentage of lighter weights suited to restockers. Not all the regular buyers were operating in a mostly cheaper market.

Restockers bought lambs in prime condition. They paid from $46-$119 for light weight lambs. Hoggets sold to $102.

It was a much plainer quality yarding of mutton, with only a limited number of prime sheep. The market was tough with most grades falling $16. The 2 score ewes sold from $20-$51 and the better 3 and 4 score crossbred sold from $44-$95 and Merinos made to $79. Prime conditioned Merino wethers sold to $98.

The NLRS said lamb quality was mixed, with extremely high temperatures over the past fortnight having an impact on finish. However, grain-fed lambs presented in prime condition. There was a fair number of trade lambs and heavy lambs were well-supplied. Light lambs suitable to restock and feed were keenly sought by local buyers. Well-finished trade lambs still commanded the attention of most buyers, while drier types lacked buyer support.

Lamb prices improved $4 on average, with medium and heavy trade lines making from $110-$135, to average around 500c/kg. There was a reasonable number of Merino lambs and trade buyers paid from $92-$123.

It was a very mixed quality offering of mutton, with all grades represented. Light and medium sheep sold mostly unchanged to a few dollars cheaper, or 259-290c/kg. Heavy ewes and wethers sold from $65-$100, or 280c-307c/kg.

In Victoria at the Hamilton saleyards, the agents yarded 7,222 lambs, 2495 fewer than last week.

The NLRS said a much better quality yarding of lambs sold to a near-full group of trade and processor buyers. Prices showed a mostly dearer trend as there were some very good pens of shorn trade and heavy weight lambs for slaughter off supplementary fed systems which met the most competition. There seemed to be more activity from export and domestic buyers in the market to obtain heavier weighted carcasses, lifting the sale. The offering overall was made up of lambs showing more cover and less light lambs compared to previous weeks.

The NLRS said most of the usual buyers attended and operated in generally firm market, with trade and heavy lambs selling a few dollars either side of firm. Quality was mixed, but a few pens of well-presented lambs were offered. The best extra heavy lambs reached $170 and the trade weights sold to $134. Quality Merino lambs reached $121. Feeder and restocker activity was limited to a few pens of lambs at $76-$107. 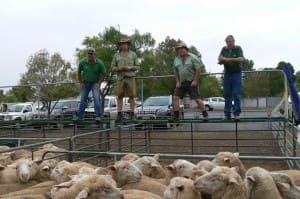 At the Ouyen Livestock Exchange on Thursday, the agents yarded 4942 lambs and 1894 sheep. 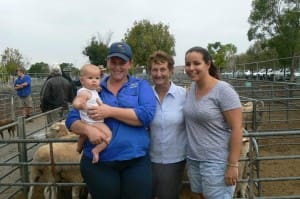 At the OPuyen sheep and lamb sale this week were, from left, Samara Pohlner holding Mallie Gallow, Joan Pohlner and Renae Galloway.

At the Hamilton saleyards on Thursday, the agents yarded 4233 sheep, 2353 fewer than last week.

The NLRS said the usual buyers were offered a very mixed yarding of all grades and weights, but mostly Merino sheep varying from recently shorn to almost full wool. Prices were $1-$2 easier for the very light sheep and firm for light weights. Medium trade weights lifted $2-$4 and heavier mutton was $2-$3 dearer in a consistent sale.

The NLRS said lamb quality was mixed, with many being light weight store Merino drafts and crossbred drafts lacked finish. Most buyers operated, but competition for better lambs from processors was very selective and easier. Feeders purchased a solid percentage of the forward store lambs and lifted values slightly.

Wethers remained equal, with most going to feeders and restockers. Heavy wethers made $85-$103 and the lighter and store drafts sold from $50-$84. The better rams sold to export feeders made $30-$74 and processors paid $5-$30 for old rams.

In Queensland at the Warwick saleyards on Wednesday, the agents yarded 2162 lambs and hoggets, and 1439 sheep.

All sheep and lambs sold cheaper in the larger yarding and a top price of $122 was paid for lambs from C. and F. Magnussen of The Summit.