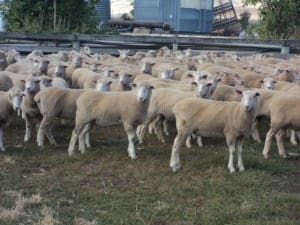 Lamb and mutton prices continued on a downward trend at the few eastern states saleyards selling on Friday last week, with seasonal conditions continuing to impact on producer turnoff and restocker confidence.

“I drove from the top Victoria to basically the bottom of Queensland last week, and the dry conditions and quality water is really catching up with us in the last fortnight.

“That singlehandedly is seeing a flush of numbers for one and also people are just thinking ‘what can I afford to keep?” he said.

“Even to lock lambs up and feed them, with the limited grain harvest we had last season, there is no cheap quality grain out there either.

“Grain prices have probably shifted somewhere $40-$60 a tonne, no less than $40 a tonne, since the headers went through,” Mr Barton said.

“That in itself questions the logic of putting lambs on a feedlot system at this time of the year.”

He agreed grain feeding costs might also bring forward the date at which lambs could be profitably marketed.

The state of the lamb market was largely due to the unfavourable start to the autumn, Mr Barton said.

“Everyone I know every day is checking what state is the weather at – what’s going to happen next.”

Processors recently have been able to buy plenty of lambs at 460-470c/kg cwt, he said.

“No-ones locking too many up when there is a dollar a kilogram difference between the forward market and the current spot market.”

But Mr Barton said there was “almost a guarantee” of a tightening of lamb supplies leading into winter.

“There is definitely going to be a shortage of supply, because the numbers are going to be reduced.

“People haven’t put the numbers away that they normally value-add.”

He said demand for lambs is still very high.

The current forced seasonal turn-off further reduces the potential for heavy lambs on the market for the second half of the autumn into winter, Mr Barton said.

The national trade lamb indicator was down two cents to 516c/kg and the heavy lamb indice was back one cent to 513.

The ESDI and national indicators for mutton fell two cents to 347c/kg.

First cross ewe lambs sold from $90-$135, and scanned four to six-year-olds made $150. Merino ewes in lamb to terminal sires met similar demand, with young scanned ewes selling from $120 to a top of $151 for three-year-old Charinga blood ewes in lamb to Poll Dorsets.

Merino wether lamb prices softened to average $54 this week, ranging from $40.50 to a top of $76.50 for 35kg liveweight Nyowee and Bunyara blood lambs out of SA. Hoggets out of Victoria weighing 50kg and just a month off shears sold for $83.

The NLRS said there were good numbers of heavier trade and heavy lambs, a few pens of extra heavy lambs. Most of the medium weight trade and lighter lambs were dry and lacked finished. There were more light lambs. All the usual buyers operated in a mainly firm heavy trade and export market.

Sheep quality was mixed, but there were some well-covered lines. Prices eased $4-$8. Medium weight ewes ranged from $68-$80 and heavy weights reached $112. Most averaged between 320-340c/kg cwt.

The NLRS said lamb quality across the yarding remained very mixed. Not all the usual export buyers were present, but there were a couple of extra orders for trade and light lambs.

Prices fluctuated, but the market generally showed a cheaper trend for heavier lambs, while the better style trade and lightweight slaughter lambs were similar to the previous week. The skin market has also weakened and most buyers were working on reduced returns of $2-$6 for skins this week.

Export competition was subdued and the heavier weight lambs, over 24kg, sold from $128 to a market top of $147 for lambs estimated to weigh about 28kg cwt. The heavier lambs were estimated at 470-500c/kg cwt.

Most of the better pens of trade lambs, 20-22kg cwt, sold from $100-$116 and the light slaughter lambs made $83-$96. In carcase weight terms, the better presented trade and light lambs made up to 540c/kg, but most sales ranged from 460-520c/kg depending on quality. Some pens of very small and plain lambs sold from $20-$55, with local restockers helping support sales.

The sheep sale was limited by quality and numbers. A few pens of heavy crossbred ewes sold from $85-$105 and middle run ewes made $50-$78. Some very light and plain sheep sold down to $20.