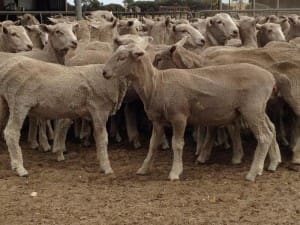 Coles is offering up to 560-570c/kg for 18-25kg crossbred lambs for December-January delivery delivered to Brooklyn or Gundagai, with a 50 percent upside, according to agents.

The forward contracts are encouraging more producers with feed to shear and hold lambs for later sale, and also boosting restocker and feeder confidence. But many producers are only committing some of their lambs to contracts, hoping for higher saleyard prices this summer.

The ESDI for mutton closed 3 cents higher on 302c/kg and the national indicator is at 299c/k, also up 3 cents.

The NLRS said lamb quality was good over most of the yarding. About 4700 new season lambs were offered, comprising a large percentage of medium and heavy trade weights. More lighter lambs returned to the paddock from the sale. Only a handful of shorn new season lambs were penned. Not all the usual buyers operated in the dearer market.

At the Central Tablelands Livestock Exchange at Carcoar on Wednesday, the agents yarded 8050 lambs, 1350 more than last week, and 2900 sheep, 400 fewer.

The NLRS said the limited numbers of new season lambs showing better condition, but most showed signs of dryness. Mainly trade and heavy weights were penned, along with plenty of store lambs suitable for the restockers. The old grades were reduced in supply and all the buyers were present but not all operated in a firm to dearer market.

Sheep quality was generally good. Medium weight Merino wethers were around firm and averaged $65 or 265c/kg cwt. Heavy 4 score first cross ewes sold up to $10 dearer and averaged $87 or 256c/kg.

The NLRS said lamb quality was quite good in the mostly new season offering. The usual processors attended, but not all major domestic buyers operated. There were more well-bred store lambs and restockers were active over all weights. Store orders were from Albury, Corowa Cootamundra, Forbes, Goulburn and the local area. New season trade lambs were in reasonable supply and sold to very erratic competition across all trade weight categories.

The NLRS said lamb quality was good. Reasonable numbers of well-presented trade weight and heavy lambs were penned for the usual buyers in a dearer market. Heavy lambs reached a top of $142. More lambs from southern areas were penned, displaying good finish and, on quality, lambs generally sold to $10 up on last week.

Restockers were again active on the large number of lighter weight lambs penned and they paid mostly from $72.50-$99 and from $20-$65 for lighter lots. Most restocker lambs were also dearer. Old lamb numbers were limited and they sold to $86.

The NLRS said new season lambs made up 40 percent of the yarding. Some good quality Merino wethers and heavy crossbred ewes were also offered in the overall mixed quality sale. A small group of the regular buyers attended, but two more processors competed in the stronger sale.

There was strong competition for slaughter lambs and these sold firm to $5 dearer. Sheep sold $5-$8 dearer.

In South Australia at the Mt Gambier saleyards, the agents yarded 4948 lambs and 342 sheep.

The NLRS said some excellent quality lines were yarded for Mt Gambier’s first sale of new season lambs. A small field of trade and processor buyers was active.

The NLRS said it was a mixed quality yarding. All the usual buyers attended.

The best store wethers in full wool sold to $113. Restockers and feeders paid $61-$113 for wethers depending on quality and weight. Prime young rams sold to $65 and older rams made $5-$30.

In Queensland at the Warwick saleyards on Wednesday, the agents yarded 2196 lambs and hoggets, and 540 sheep.

The lamb market was firm to a shade cheaper and the mutton market remained firm. The top-priced lambs weighing 60.6kg lwt sold for $133 for P.E. and J.A. Wheeler of ‘Rosebud’, Texas.