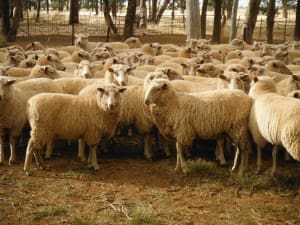 Despite the Queen’s Birthday long weekend, prices for lambs and sheep consolidated the big weekly gains in most categories.

After the completion of Friday’s saleyard sales, the National Livestock Market Reporting Service quoted its Eastern States Daily Indicator for trade lambs as up two cents to 588c/kg, finishing off a weekly gain of 12 cents. The ESDI for heavy lambs was down one cent to 593c/kg, for a weekly rise of nine cents. The national ESDI for trade lambs is at 589c/kg, up two cents and the heavy lamb indice is firm at 594c/kg.

However, the biggest weekly gains were seen in the restocker, Merino and light slaughter lamb categories. The daily and weekly changes in the other lamb ESDIs are: restocker 590c/kg, up 4 cents daily, up 48 cents for the week; Merino 549c/kg, up 1c, up 20c; light 568c/kg, down 1c, up 28c.

The ESDI and national indicators for mutton closed on 400c/kg, up one cent to finish off with a 26-cent lift in the east.

“However, as the wool market continued to break records, there was a significant trend with full wool Merino sheep offered this week.”

Proven joined and scanned-in-lamb Merino breeders with 6-7.5cm fleeces offered last week made $125-$140, averaging $134, she said. The top-priced lot was a line of 3 and 4-year-old 50kg lwt ewes carrying more than 7.5cm of wool and joined to Border Leicester rams from Crookwell NSW. Last season these ewes cut 6-7kgs of wool at 18.5µ micron, which on the current clean price of 1579c yielding 70pc, would mean a gross return, notwithstanding shearing costs, of $72 a head, Ms Adams said.

The NLRS said lamb quality was mixed though slightly improved on last week. There were good numbers of well-finished and grain-assisted lambs along with the plainer types. Most of the yarding was heavy and extra heavyweight lambs. The usual buyers competed in a fairly steady market.

The sheep were mostly Merinos and quality continued to be mixed. Prices jumped with medium and heavyweight Merino ewes selling from $84-$154. Crossbred ewes ranged from $94-$133 and Dorper ewes sold from $80-$135. Merino wethers made from $91-$145.

The NLRS said the quality of the extra heavy lambs was very good, but mixed throughout the other grades. Mainly trade and heavy weight lambs were offered, along with an increased supply of stores. All the buyers operated except one and competition was softer, resulting in an easier market.

In Victoria at the Shepparton saleyards on Friday, the agents yarded 1103 lambs, 777 fewer than last week, and 571 sheep, 79 less.

The NLRS said only a few meat companies followed the sale as lamb and sheep numbers eased before the Queen’s Birthday long weekend. Apart from a few pens of heavier lambs, quality was generally very plain and comprised mostly lighter weight slaughter types of mixed breeding. The market for heavier lambs displaying reasonable finish was firm to dearer, while the lighter and plainer conditioned lambs were generally cheaper amid limited processor competition.

Prices reached a top of $181 for a pen of heavy export lambs. At the top end of the market about 10 pens of heavy lambs above 25kg cwt sold from $158-$181, ranging from an estimated 570-600c/kg cwt. The remaindered of the yarding was of secondary quality, with only a few pens of domestic lambs making above $120 and the majority of sales at $85-$112. Carcase rates on these plainer bred and finished lambs varied according to quality. Pens of very light weight and small lambs sold from $20-$68.