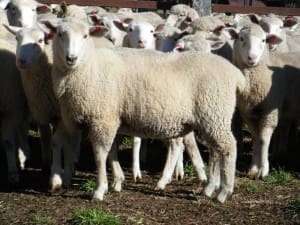 SLAUGHTER lamb prices were firm to slightly easier in saleyards mid-week, with plainer quality lines and heavy lambs most affected.

At Bendigo on Monday, the National Livestock Reporting Service quoted most of the better finished trade lambs as making $130-$155, or 590-620c/kg, with select pens higher.

Restockers were active at Ballarat, Dublin, Naracoorte and Muchea but not at Bendigo nor elsewhere, with the general falling restocker interest being reflected in a 44 cent drop in the NLRS’ Eastern States Daily Indicator for restocking lambs after Tuesday’s saleyard sales.

The ESDI and national indicator for mutton closed on 389c/kg.

In NSW, the NLRS said over-the-hook lamb rates eased this week, on the back of the last week’s short week and mixed demand from buyers. Mutton rates across all weight ranges were unchanged.

In WA, the NLRS quoted most over-the-hook lamb and mutton rates as unchanged, although 18-22kg lamb rates lifted 3 cents to average 577c/kg.

Tasmania’s lamb and mutton over-the-hook rates were quoted as unchanged this week.

The NLRS said the good quality yarding had a fair number of top heavy weight lambs, along with lighter lambs and Merinos.

The NLRS said the lamb yarding consisted of a good supply of trade weights, along with several runs of heavy weights and some light lambs. Quality was generally good and although the light weights were mainly in 2 score condition. Most lambs were well-finished, with several lots supplementary-fed. The market sold to an easier trend, with most lambs $5-$6 cheaper, although some sales were back more.

The yarding of mutton consisted of several pens of heavy weights carrying a good skin, along with a good supply of medium weight sheep. The market was mainly unchanged for most mutton.

The NLRS said lamb quality was similar to the previous sale, with good numbers of well-finished lines and plainer types. The usual buyers competed in a fairly steady market that fluctuated depending on quality.

The NLRS said lamb quality was very mixed, reflecting the season and tail-end drafts of stock now coming through the system. Quality trade weight slaughter lambs were in limited supply, with secondary types dominating the yarding. Prices, compared to a fortnight ago, were firm for the best quality domestic lambs, while extra heavy export pens and plainer trade lambs showed a softer trend.

The market reached a top of $208 for a pen of lambs estimated to have a carcase weight of about 40kg. The seconds of the draft made $206. There was little restocker interest and most of the light lambs sold to processing orders at $72-$108. The plainer finished domestic lambs generally sold from $110-$130 at fluctuating rates depending on quality and mostly made around 560-580c/kg cwt. There was a bigger offering of Merino lambs and the best pens, which had been supplemented on grain, sold from $131-$147. Lighter weight and leaner Merino lambs generally made from $66-$121.

Domestic buyers continued to purchase odd pens of heavier lambs to access better finish and quality, paying up to $160. The majority of the better finished trade lambs sold from $130-$155, at estimated carcase rates of 590-620c/kg, with select pens higher.

The mutton sale included a good offering of extra heavy first-cross ewes that sold from $100-$132 and averaged nearly $124. The main lines of Merino sheep sold to a top of $125 and averaged over 400c/kg cwt.

The heavy lambs sold a few dollars easier and made to $190, with the best of the trade weight lambs selling at similar levels to last week. Restockers and feeders were again active, sourcing lambs from $94.50-$120, with the light lots from $55-$74. Light weight 1 and 2 score lambs sold from $80-$100.

The NLRS said the mixed quality yarding of crossbred and Merino lambs sold to generally easing competition from the usual local and interstate trade and processor buyers. The secondary lambs were the most affected by the easing prices and feeders were keen to secure crossbred lambs to feed on.

The NLRS said a smaller field of trade and processor buyers was active along with some restocker orders. Prices fluctuated across the different categories.

The NLRS said lower prices last week and maintenance shutdowns resulted in a much smaller yarding this week. Lamb numbers were solid, but quality was mixed this week with some very good heavy and trade lambs along with solid numbers of Merino and secondary trade lines. Lamb processors appear to be meeting most of their requirements from direct-to-works contracts.

Lamb prices continued to decline across all categories with most lamb from $3 to $10 cheaper. Light lamb suitable for air freight processors and feeders were from firm to $5 cheaper, with prices from $65-$95. Trade lambs made $80-$120 to be close to $8 cheaper. Better prime lamb drafts averaged 500c/kg cwt, while plainer and Merino drafts sold from 480-500c/kg and solid numbers went to feeders. Most light store lambs made $30-$62, with the Merino drafts averaging $52 and dearer. Heavy lambs sold from $115-$138, with most cheaper by more than $5.