Lamb prices firm slightly as restockers and feeders buy up 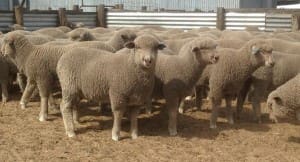 Increasing numbers of lambs’ skins are showing dryness and seed contamination, and many processors with adequate direct consignments are still able to limit saleyard purchases to closer intra-state centres.

Restockers and feeders in Victoria and NSW are buying up into new season trade weight lamb ranges at current rates, which according to indicative National Livestock Reporting Service daily carcase weight indicators were yesterday 26-40 cents lower than a week ago for all but heavy lambs.

Most light 12.1-18kg new season lambs sold from 415-590c/kg cwt in eastern state saleyards over the last two days, with restockers paying over 600c/kg for some drafts at Wagga on Thursday. Rates for sub-12kg lambs were dearer, up to 740c/kg to restockers at Horsham.

In New South Wales at the Cootamundra saleyards on Wednesday, the agents yarded 6300 lambs, 2734 more than the last sale, and 3700 sheep, 632 more than two weeks ago.

The NLRS said the quality of the trade and heavy lambs was good. About 4000 new season lambs were penned, including more light store and Merinos. Some of the new season lambs were starting to dry in the skin and there were few shorn lambs. The main core of buyers operated in a cheaper market than two week ago.

Old lambs eased at a similar rate, with the trade weights ranging from $76-$106 and the heavy weights making to $126.

The quality of the sheep was not to the standard of the previous sale and prices eased $20. Medium weight ewes made $45-$73 and heavy weights to $83. Heavy Merino wethers reached $93. Most ranged from 250-280c/kg cwt.

At the Central Tablelands Livestock Exchange at Carcoar on Wednesday, the agents yarded 6250 lambs, 750 fewer than last year, and 4200 sheep, 1375 less.

The NLRS said quality was very good in the heavy new season and better trade weight lambs, while the remainder tended to be mixed. Mainly trade and heavy lambs were penned, along with more store lambs suitable for restockers. All the usual buyers operated and competition was reasonable, resulting in a generally firm market.

Old lamb quality was mixed, with shorn lambs attracting some competition. Trade lambs made from $86-$115.

Sheep quality was quite good, with limited supplies of lighter weight mutton. A fair percentage of sheep were shorn or with little skin value. Merino trade sheep made from $52-$74.20, or around 265c/kg cwt. Heavy ewes sold unchanged to $3 dearer at $23-$97.20 at around 233c/kg. Merino wethers were well-supplied with the heavier pens making $74-$88.

Lamb numbers were similar with 13,600 yarded. Quality was average, with limited numbers of trade weight and heavy lambs offered. The usual buyers attended, but not all operated fully in a cheaper market.

Lambs sold $5-$8 easier and more in places. Heavy lambs reached a top of $146. There was a large number of lighter lambs showing the effects of the tough season, with restockers and feeders very active on suitable lambs. They paid mostly from $82-$106.50, and from $54-$78 for lighter lots with most restocking lambs a few dollars easier.

The NLRS said a limited field of buyers attended the sale.

The NLRS said it was a mixed quality yarding at Katanning. Store Merino ewes and lambs dominated the yarding, with prices easing slightly.

Restockers and feeders paid $30-$92 for wethers depending on quality and weight. Young rams and wethers were in demand and remained firm. Live export wethers sold to $95. Prime young rams sold from $55-$89 and older rams from $5-$10.

In Queensland at the Warwick saleyards on Wednesday, the agents yarded 1343 lambs and hoggets, and 163 sheep.

The market was firm to dearer for lambs and fully firm for mutton. The top-priced crossbred lambs weighing about 72.5kg lwt from J. & J.R. Neal of ‘Camp View’, Tara, sold for $150.