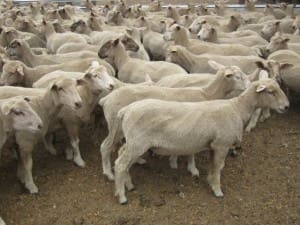 Lamb and mutton prices held firm on Friday after a big week of rises for all categories.

After Friday’s saleyard sales, the National Livestock Reporting Service put the National Trade Lambs Indicator at 511c/kg and the heavy lamb indice at 517c/kg. The mutton indicator was on 309c/kg.

The Eastern States Trade Lamb Indicator finished the week down one cent to 508c/kg, but had lifted 26 cents in the past week, and the ES heavy lamb indicator closed firm at 515c/kg, but had a weekly rise of 28 cents. The ES mutton indicator ended the week on 309c/kg, up two cents, but with an overall 15-cent increase during the week.

Sheep and lamb numbers increased on AuctionsPlus by 9955 to 57,070 last week, helped by the North East Victorian Lamb Background and Finishing Sale.

AuctionsPlus market operations officer Anna Adams said restockers favoured lines with wool in a large offering of Merino ewe hoggets during the week. Prices averaged $93 and ranged from $70 to a top of $118 for a line of 55kg ewes with an average 1.75’’ skin.

Processors paid $65 or 285c/kg cwt for a line of six and seven-year-old Merino ewes at Dubbo, but 550 late-June shorn Merino ewes at Cressy in Tasmania topped the slaughter prices, selling
for 378c or $80.50.

Ms Adams said prime lamb buyers and finishers showed insatiable demand last week, across the Tuesday, Thursday and the NE Victorian lamb sales, with a 93 percent clearance of lambs offered during the week.

The NLRS said lamb quality was similar to the previous sales, with good numbers of well-finished lambs. A large percentage of the yarding was shorn lambs. The usual buyers competed in a fairly steady market.

The NLRS said lamb quality was average. Most of the usual buyer attended, but there was a limited supply of good trade and heavy lambs. Lambs generally sold around last week’s levels, with a few pens of well-presented shorn young lambs making $117-$129 to average close to 500c/kg cwt. Restocking activity was again keen on the pens of suitable light lambs and they competed with processors, paying mostly from $55-$83.

The sheep yarding included many crossbred ewes and most sheep sold generally firm. A few pens of young Merino ewes and wethers sold to restockers from $44.50-$68.