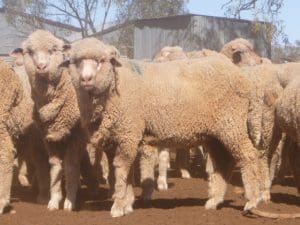 Some processors were not operating fully in several markets, lowering prices for trade weight new season lambs in New South Wales by $5-$12, according to the National Livestock Reporting Service. Young lamb prices also fell by up to $10 in Victoria, but held firm for quality in South Australia.

Prices for trade weight heavy and extra heavy old lambs also slipped this week, by up to $10-$15 in New South Wales, especially for secondary and plain lines. On Tuesday at Forbes in New South Wales and at Muchea in Western Australia, about 35 percent of the lamb yardings were new season drafts.

Restocker interest in light and lighter trade weight lambs remains strong, with buyers paying over 700c/kg for some lines.

The ESDI and national indicators for mutton fell 5 cents to 387c/kg.

In New South Wales, the NLRS said there were no changes made to over-the-hook lamb and mutton indicators this week. Due to the high prices, saleyard supply is expected to be higher this week, which may impact prices.

Up-to-date Western Australian and Tasmanian over-the-hook rates were not available from the NLRS when this report was published.

The NLRS said the plainer quality lamb yarding had more Merinos and White Dorpers, though there was still a pretty good selection of trade and heavy weight lambs. Not all the regular buyers operated in the cheaper market.

The good quality sheep yarding had very few plain lines. Light and medium weight sheep were $3-$5 dearer and the heavy weights were around firm. The 2 score ewes sold from $40-$85. The better 3 and 4 score Merinos sold from $80-$130 and the crossbreds made to $140. Merino wethers sold to $138.

The NLRS said 3100 new season lambs were penned. The quality was mixed and prices fluctuated. There were quite a few secondary lambs in the yarding of mainly trade weight lambs, which had a limited number of heavy weights and good young lambs. All the usual buyers attended but not all operated fully.

It was a mixed quality sheep offering. Heavy weight Merino ewes sold to $129 and heavy crossbred ewes made to $131.

The NLRS said the quality of the lambs was fair to good. The yarding included a few pens of well-finished trade and heavy weight young lambs. Restockers were also well catered for. Market trends were generally firm to cheaper, with young lambs showing only weight-related price changes. Prices for the heaviest old lambs varied on quality. Trade weight old lambs were up to $3 cheaper. Restocker lambs remained firm. There were insufficient grown sheep for a reliable market quote.

The NLRS said lamb quality was very mixed, with well-finished and plainer lambs yarded. Not all the usual buyers were present nor competed in the cheaper market. There were 10,100 new season lambs penned, and quality was mixed with some well-finished lambs and drier types.

The NLRS said the lamb penning included a good supply of well-finished trade and heavy weights off crop and supplementary feed. The quality of the offering was fair to good and included the first pen of new season lambs, 22.1-24kg cwt lambs with $7 skins that made $157, or 625c/kg.

The sheep were mostly trade weights, with a few pens of heavy weights and a couple of pens of full wool Merino sheep. The market trends was generally dearer, as processors struggle to fill requirements. Increased skin values also contributed to higher prices in some cases.

The NLRS said the number of new season lambs increased to nearly half the yarding. The market was erratic and two regular export buyers didn’t operate on lambs. Young lamb quality was very good, but the old lambs were mostly plain, with more lacking fat cover and with secondary skins.

The market was cheaper, with young lambs $2-$8 easier. The line-up of old season slaughter lambs suffered bigger price discounts, partly due to the major domestic buyers now showing a preference for young lambs.

Bidding for new season lambs reached $175 for a pen estimated at 27kg cwt in a $7 skin. There were just five sales over $170. The lead drafts of neat young trade weight lambs sold from $138-$167, or mostly 630-645c/kg cwt. Some pens of lighter weight young lambs under 18kg cwt sold from $94 up to $108 for a draft sold to a local restocker. Carcase prices for young lambs ranged from 580-680c/kg, depending on weight and condition, with pens lacking maturity and finish tending to be at the lower end of the range.

Old season lamb quality was very mixed and buyers picked their way through the offering, resulting in a cheaper market. The best of the export weight lambs sold to $175 and the better quality trade weights made $130-$165. However, most of the old lambs were plainer types lacking carcase finish and these made $96-$126. Carcase results varied for the old lambs, with the better quality types estimated at around 560-610c/kg.

Demand for mutton intensified to push rates for good trade weight Merino sheep back over 400c/kg cwt. Most Merino ewes and wethers sold from $88-$126, depending on size and skin. Heavy crossbred ewes were also dearer at $100-$128, with local agents operating on some pens.

The NLRS said lamb quality was very mixed. Most of the regular buyers attended, but not all operated fully.

Heavy lambs made to $173, with the better covered trade weights selling from $132-$158 and averaging around 600c/kg. A pen of new season young lambs sold to $136 or around 680c/kg. Buyers were selective with their purchases, with the plainer types selling up to $10 easier and more in places.

The NLRS said lamb quality was mixed, with a wide range of type and quality offered as more new season lambs came forward. These sold to the usual trade, processor and restocker buyers.

The NLRS said lambs sold cheaper, despite the small offering. Mainly medium weight lambs in 2 and 3 score condition were yarded. The usual buyers attended and most operated fully.

The NLRS said wet conditions reduced numbers this week. Quality overall was better than last week, with fewer very plain drafts offered. New season lambs made up more than 35 percent of the lamb yarding. The heavier weight drafts were in excellent condition, but some lighter drafts lacked finish. Old season lambs were mixed in quality, but the market firmed with the return of air freight competition.

Ewe and wether prices remained firm for quality lines and rams were strongly sought by live export buyers. Ewe prices were firm to marginally dearer with more restocker competition. Light weight ewes were $2 dearer at $47-$70 and most medium weight ewes made $70-$90, up to $4 dearer. Heavy weight ewes sold firm at $79-$101, or close to 315c/kg. Restockers paid from $70 up to $118, for large framed young ewes in full wool.

Wethers sold to solid export feeder competition, with most sales firming on last week. Heavy wethers made $90-$112. The lighter and store drafts were firm to $5 dearer at $80-$104, depending on frame and wool length. Rams were in demand, with export feeders and processors keen to secure numbers. Better ram lambs sold to processors for $95-$114, and exporters and feeders paid $75-$120 for suitable young drafts. Old rams sold to processors for $45-$88.