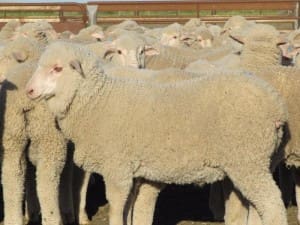 These May-June drop Merino lambs, 15.2kg cwt, sold for $79.50 at Deniliquin on AuctionsPlus this week.

Supply was higher across all of the eastern states as warmer conditions are expected this weekend, MLA said. Although the quality of new season lambs was generally good mid-week, trade and heavy weight young lambs met erratic demand from buyers.

After Thursday saleyard markets, the Eastern States Daily Indicator for trade lambs fell 12 cents to 524c/kg and the heavy indice had fallen 15 cents to 507c/kg. Reflecting the relative strength in restocking interest, the other lamb ESDIs were less affected: restocker 565c/kg, down 1 cent; light 472, up 3c, and; Merinos 505c/kg, down 3c.

Mutton consignments were firm in the week up to Thursday, at 61,203. The mutton ESDI closed 14 cents down on 330c/kg and the national indicator was 16 cents lower at 329c/kg.

MLA said eastern states sheep slaughter recently lifted to its highest point since the first week of March, with 146,865 head processed at the close of last week as many producers conduct seasonal sheep culls.

In New South Wales at the Central Tablelands Livestock Exchange at Carcoar on Wednesday, the agents yarded 7000 lambs, 3407 more than last week, and 2825 sheep, 1125 more.

The NLRS said new season lamb quality was outstanding, with just over 20,000 penned. Old lamb numbers declined and quality varied greatly. All the usual domestic and export buyers attended, but not all operated at full capacity. New season lambs were well-supplied in all trade weight classes and competition was extremely erratic with the market struggling to find traction.

The most-affected weight category was 22-24kg cwt lambs, for which prices dropped to a low of $114.50. The trade generally operated from 480-499c/kg cwt. Well-finished medium and heavy trade lambs made $108-$132. There was increased restocker interest at the cheaper prices and they paid from $76-$115.

Old trade lamb quality was plainer, with most lambs struggling to attract competition. The better finished 21-24kg lambs sold from $80-$115, with heavy trade lambs averaging 414c/kg. The reduced selection of heavy and extra heavy lambs sold to a smaller group of buyers from $109-$155.

The NLRS said lamb quality was better this week with many trade weight and heavy lambs showing good finish. They were available in reasonable numbers. The usual buyers operated in a mostly firm market with the better presented lambs selling a few dollars up on selected lots.

The NLRS said old lamb quality was plain to average in the old lambs and penning for a restricted number of buyers.

Restockers and feeders paid $50-$85 for wethers, depending on quality and weight. Bare shorn live export wethers sold from $80 and those with a fleece made to $101. Young rams sold to $61 and older rams made $5-$35.

In Queensland at the Warwick saleyards, the agents yarded 990 lambs and hoggets, and 336 sheep.

The market eased slightly on last week’s rates. A good line up of hoof and hook competition lambs met strong support from buyers, with the champion pen of lambs selling for $204.

The top lambs in the general yarding from T.G. and M.S. Thomson of Boona Mia at Tara sold for $135.