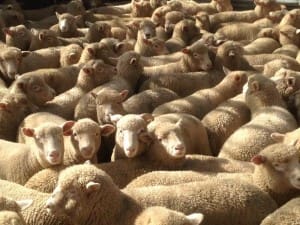 New season drafts are still making up less than 10 percent of saleyard offerings, but the light new season lambs are selling mainly from 500-650c/kg and trade weights are making mostly 550-650c/kg cwt in eastern states saleyards.

After Tuesday’s saleyard sales, the NLRS quoted falls in all Eastern States Daily Indicators for lamb and mutton, especially for the light and restocker lamb categories.

The ESDI and national indicator for mutton both fell two cents to 391c/kg as the overall national saleyard offering increased.

In NSW this week, the NLRS said over-the-hook lamb rates were mainly firm week-on-week and no quote has been given due to a regular contributor not quoting. Mutton rates were unchanged.

In Victoria, the NLRS said over-the-hook lamb rates were firm to cheaper across most weight categories as some plants will soon shut for maintenance breaks, affecting demand. Mutton rates were unchanged.

In South Australia, the NLRS said OTH lamb rates were firm to dearer across all categories, except extra heavy weight lines. Mutton rates were unchanged and a no quote is given due to a regular contributing not quoting at this time.

In Tasmania, the NLRS quoted OTH lamb rates as lifting 10-20c/kg this week, up to 570c/kg for trade weight lambs. Mutton rates were unchanged.

Western Australia’s updated OTH rates were not available when this report was published.

The NLRS said following the previous sales rain-affected market, numbers were up considerably. It was a pretty good quality yarding with a good mix of trade and heavy weight lambs and fair numbers of lighter weights and new season lambs.

The NLRS said the lamb yarding included the first new season drafts. The overall quality of the lambs was good, though a number of secondary quality and restocker lambs were penned. Market trends through the lambs were generally firm to cheaper and a drop in weight was reflected in prices for heavyweights. The improved quality of the trade lambs was a factor in the higher average prices. The sheep market was firm to dearer with some better quality sheep penned.

The NLRS said lamb quality was fair with good numbers of well-finished lambs and some plainer types. Heavy and extra heavy weight lambs were well-supplied. The usual buyers competed in a cheaper market. Agents penned 5400 new season lambs and quality was good.

The sheep were mostly Merinos and quality was very mixed. Prices remained strong, with Merino ewes selling from $76-$140. Crossbreds ranged from $80-$136. Merino wethers sold from $86-$125.

The NLRS said the lamb yarding included more trade and heavy weights. Quality was good, with fewer light weight lambs and most drafts coming off crop. Trade lambs sold firm to $8 cheaper and heavy weights were down by $6-$10.

The sheep yarding consisted of several pens of well-finished ewes and wethers, mainly heavy and medium weights, with several lots in full wool. The market changed little, with most mutton selling firm compared to the sale two weeks ago.

The NLRS said the usual buyers attended, but once again not all operated at capacity and some exporters did not follow through to the mutton sale.

Lamb prices varied on quality and carcase finish, with the best export and trade lambs mostly firm to $3 dearer. Secondary types were often a few dollars easier. Export competition was more animated this week and three pens of extra heavy lambs over 30kg cwt sold from $190-$194.

The sale included the first notable draft of new season lambs, with 90 lambs off irrigation country and estimated to have a carcass weight of about 24kg with a $10 skin selling for $162 to a domestic order. After this there were just a few pens of new season lambs scattered throughout the yarding, and the majority were lighter types which sold from $78-$116.

The bulk of lambs were plainer trade weight types which sold from $103-$130 at varied carcase rates depending on quality and fat cover. Light weight slaughter lambs generally made from $67-$96. Prices for Merino lambs fluctuated, with the better presented pens off feeders selling to a top of $118.60, though most sales were from $87-$107, or 520-530c/kg cwt. Some pens of very small Merino lambs in 1 score condition sold to restockers at $32-$47.

The lead drafts of trade lambs suiting top-end domestic and supermarket orders sold from $140-$169, or an estimated 600-630c/kg. The selection of heavy export lambs was limited, with the general run making $168-$185, and just odd pens of extra heavy types to $194.

The sheep sale included several pens of extra heavy crossbred ewes which sold from $115 -$145 to be dearer week-on-week. There was a good selection of recently-shorn Merino sheep, and the main lines of heavy wethers sold from $96-$123, to average over 400c/kg cwt. Heavy Merino ewes in a big skin sold to $131.60, with the general run of bare-shorn ewes making $68-$105. Most mutton sales sold from 350-400c/kg.

The NLRs said lamb quality was plain to average. Most of the regular buyers attended, although not all operated fully.

The NLRS said the plainer quality crossbred and Merino lambs sold to erratic competition from the usual trade and processor buyers. The sale started slowly before recovering as it progressed. However, except for a small percentage of the very best quality lambs available, prices eased. Feeders and restockers were only occasional participants.

The NLRS said lamb quality was mixed with most being 2 score Merinos, plus a few good heavy trade and airfreight types.

Graziers provided the competition on Merino lambs. Ewe lambs averaged $62 and sold to $100, while keenly sought wether lambs made to $107 and averaged $81.