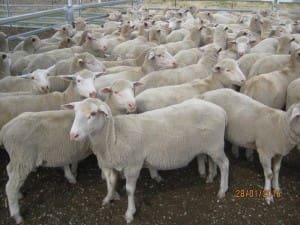 Processors are bidding strongly for any quality lines of trade and heavy lambs yarded, underpinned by strong restocker demand for suitable lines as confidence in the seasonal outlook and market improves, and contracted supplies run out.
Light slaughter lambs, 12.1-18kg cwt and with $4-$6 skins, sold to 731c/kg in Tamworth and to 644c/kg in Dubbo. Selected pens of light-medium trade lambs, 18.1-22kg cwt and with skins worth $2-$8, sold from $112-$128, or 540-585c/kg in Tamworth, and from 463-585c/kg in other New South Wales, Victorian and South Australian saleyards.
Highlights this week included extra heavy lambs selling to $202 in Forbes this week, better prices for quality Merino lambs and improved rates for heavy sheep after recent market discounts. Over-the-hook rates are also starting to move up as processors try to encourage more direct sales.
However, the National Livestock Reporting Service’s Eastern States Daily Indicators for lambs – lower for all categories except light and Merino lambs – at least partially reflected the generally lower seasonal quality of yardings.
After Tuesday’s saleyard sales, the ESDIs for lamb were: restocker 551, down 21c/kg; Merinos 495c/kg, up 9c; light 518c/kg, up 1c; trade 550c/kg, down 5c; heavy 559c/kg, down 2c. The national trade lamb closed down 7 cents to 551c/kg and the heavy indice finished at 560c/kg, down 4 cents.
The ESDI for mutton improved 7 cents to 309 and the national indicator closed up 6 cents to 310c/kg.

In New South Wales at the Dubbo saleyards on Monday the agents yarded 15,665 lambs, 4820 fewer than last week, and 10,075 sheep, 4315 more.
The NLRS said despite the excellent rains of last week there was still a good-sized yarding. It was a mixed yarding with a good selection of heavy weight lambs and only limited numbers of ideal trade weights. Some well-finished Merino lambs were
yarded and good numbers of crossbred and Merino hoggets.
Light weight lambs sold to processors were $6 dearer, with the 12-18kg 2 scores making $76-$108. Trade lambs were $5 dearer, with the 18-22kg 3 scores making $96-$138, to average 560c/kg cwt. Heavy weight lambs finished firm to $3 dearer with the over 22kg 4 scores selling from $124-$179, to average around 558c/kg. Merino lambs were $1-$3 dearer, with the trade weights selling to $114 and the heavier weights to $136. Crossbred and Merino hoggets sold to $115.
Most grades were represented in the mixed yarding of sheep. Most of the Merino ewes sold $6 dearer and the crossbred ewes were $2-$4 cheaper. The 2 score ewes sold from $20-$69. The better 3 and 4 score crossbreds made $55-$94 and woolly Merinos sold to $126. Woolly Merino wethers sold to $115.

At the Tamworth saleyards on Monday, the agents yarded 4400 lambs, 2600 more than last week, and 1400 sheep, 500 more.
The NLRS said the quality of the offering was fair to very good and comprised a large selection of lightweight young lambs suitable for restockers. There was a reasonable supply of well-finished trade and heavy weight lambs for butchers and processors.
Demand from restockers was very high, reflecting strong confidence in both seasonal conditions and the market. Restocker lambs of all weights and grades sold to a dearer trend, with the better quality lambs attracting the keenest competition.
Demand for both trade and heavy weight lambs was also higher, with market trends generally firm for trade weights and up to $4 dearer for the heavy and extra heavy weights.
A fair to good quality penning of sheep sold firm to dearer, but the price changes were not significant.

In Victoria at the Bendigo saleyards on Monday, the agents yarded 12,167 lambs, 4416 more than last week, and 3001 sheep, 1585 more.
The NLRS said lamb quality remained mixed, with most agents having a small selection of supplementary-fed pens before quality tailed-off into plainer grass-finished types.
Bidding fluctuated, but most of the better quality slaughter lambs sold $1-$5 dearer. Competition was keenest for domestic lambs displaying good carcase finish. Prices reached a top of $178 for heavy export lambs estimated at over 30kg cwt.
About a dozen pens of heavy export lambs over 28kg cwt sold from $160-$178. The lead pens of well-finished shorn lambs weighing 24-27kg mostly sold from $140-$155 and medium trades made $125-$138. On a carcase basis, the better quality slaughter lambs started at about 530c/kg, but mostly ranged from 550-565c/kg for the pick of the trade weight lambs. Select pens of medium domestic lambs made up to 580c/kg.
There was an improved selection of Merino lambs, with lines off grain selling up to $133. It was mainly the secondary lambs, lacking carcass finish and fat cover, which sold below 500c/kg. The main lines of light 12-16kg lambs sold to restockers averaged $9 dearer at $73-$96.
The sheep market was dearer. Heavy ewes, which had been discounted at recent sales, recorded good price gains. Heavy Merino ewes in a high-value skin sold to $100 and heavy crossbred ewes made $97.60. Most of light and trade weight ewes
made from $55-$75, with very light sheep from $32-$50. A price range of 270-310c/kg cwt covered most of the better mutton sales.

Ballarat’s heavy lambs up to $10 dearer

In Western Australia at the Muchea saleyards on Wednesday, the agents yarded 3400 lambs, 3936 fewer than last week, and 4844 sheep, 44 more.
The NLRS said secondary and store lambs dominated the yarding.  All usual buyers were active. Prime lambs sold dearer and all other categories were firm to slightly dearer.
Prime trade lambs sold from $95-$120, but the limited numbers were the reason for the $4 price lift to 485c/kg cwt. Plainer trade weight lambs made $80-$104 and averaged closer to 460c/kg. Better light lamb suitable for air freight and restocking orders were $4-$9 dearer at $65-$91. Light and store lambs, including Merino drafts, also lifted, with restockers paying $30-$76, up to $10 dearer.
The ewes offered were of mixed quality and mostly plainer drafts. However, ewe mutton prices lifted overall, with the light and plain conditioned drafts making $20-$56, around $4 dearer. The 2 score medium weight processor mutton made $44-$60, up $3 and close to 250c/kg. Better conditioned and heavy weight ewes made $48-$69, to be firm to $6 dearer. Restockers were very active on all lighter conditioned ewes and these were $4-$15 dearer at $20-$64.
There was selective live export interest on wether and ram drafts. Wether prices remained close to firm. Heavy export-ready wethers made $75-$95 and some light wethers sold from $60-$70. Feeders and restockers paid $40-$101 for suitable drafts, with the top-priced wethers having skin values above $15. Ram demand was slightly stronger, with export rams making $55-$82.50.
Ram lambs sold to processors made to $88 and old rams sold from $5-$35.

At the northern Tasmanian saleyards at Powranna and Kilfaddy on Tuesday, the agents yarded 1250 lambs, 180 more than last week, and 1200 sheep, 100 fewer.
The NLRS said most lambs are still in the wool and quality was mixed. Most lambs were $5-$8 cheaper, with the exception of light lambs which were up to $10 dearer due to strong restocker and export competition.
Restockers paid $79-$86 for well-bred lambs and exporters paid $70-$80 for light lambs destined for the Middle East. Light trade lambs sold from $80-$90, trade weights made $80-$119 and heavy lambs returned $110-$130.
In the mutton market, most prices were $8-$10 dearer, with strong local and interstate competition. Very light ewes made $24-$34, light weights returned $34-$61, medium ewes sold from $47-$60 and heavy weights made $35-$62. Restockers paid $78 for a run of heavy wethers in full wool.
Sources: AuctionsPlus, MLA, NLRS.