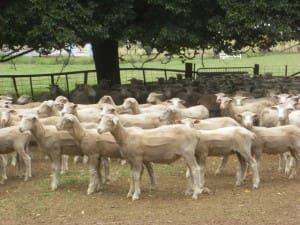 These 16.5kg cwt Dorset-Merino lambs near Canberra sold for $109 on AuctionsPlus last week.

Lamb and mutton prices fell further in saleyards late last week, despite falls in numbers at the Victorian and NSW centres that operated on Friday.

However, rain in south-west, central and eastern Victoria and south-eastern NSW in the past week is expected to assist producers looking to hold stock for finishing, tightening supplies into saleyards in coming weeks.

But Landmark national livestock market manager Mark Barton said the need for cashflow was still a major driver for sheep and lambs into markets.

“While there has been an easing in some seasons, there are areas in south-western NSW and a large area of NSW that are still reasonable but not great.

“But coupled with the need for cashflow, we are still seeing numbers steadily hitting the market.”

Mr Barton said the pressure had come off supplies to processors recently.

“Due to their forward supply arrangements, they’ve probably seen an opportunity to ease their buying in saleyards to fill their numbers each week.”

Mr Barton said there were some pre-Christmas contracts where a few lambs were bought up, but with the season drying off in again in some areas, there has been a steady flow of stock into markets.

“Supply has reasonably easy to get so they have taken that opportunity to ease the market back a little.”

But Mr Barton said the general feeling in the industry was that the market had no choice but to continue to firm from May to June.

“So if you are in a position to do it, I would say hang onto your lambs for sure.”

Mr Barton said the market had found a new level.

He hasn’t seen any forward contracts for March to June supply, but some clients have been talking to processors. He has had “loose discussions” with processors on “where it won’t get below from March right through till June”.

“I reckon I will be selling lambs in March at probably 530-550c/kg cwt and then I think we will lock in April, May and June around the same time,” he said.

“To see a market somewhere in the mid-500c/kg range as we head into the autumn months, I think is a realistic measure of the market at the moment.

“Anyone buying store lambs or lambs to put on feed is going to need those sort of rates to make the numbers tack up.”

Mr Baton believes there are a few producers with lambs sitting back to see how the market goes, but a lot of clients do still need to sell lambs because of cashflow,” he said.

“Season is allowing people the ability to make a choice.”

The National Livestock Reporting Service’s Eastern States Daily Indicator for restocker lambs was the only indice to record a positive change after Friday’s saleyards sales. The restocker indicator lifted six cents to 554c/kg cwt, though it still fell 19 cents for the week.

After Friday’s saleyard sales, the mutton ESDI was unchanged to close on 351c/kg, but lost 13 cents for the week. The national mutton indicator was down one cent to 349c/kg.

AuctionsPlus offered sheep and lamb offered climbed by a solid 16,000 to 67,800 head last week, with 44,000 in Tuesday’s two sales placing pressure on prices.

AuctionsPlus market operations officer Anna Adams said while numbers sold at auction declined, the benefit of having a high bidder to negotiate with was taken advantage of and many lots were sold under negotiation.

The NLRS said lamb quality was again fair with good numbers of well-finished lambs offered, including heavy and extra heavyweight lines. The usual buyers competed in a cheaper market.

The sheep were mostly mixed quality Merinos. Prices eased $4 with Merino ewes selling from $84-$117. Crossbred ewes made from $72-$117 and Merino wethers reached $126.

Heavy lambs up to $17 cheaper at Cowra

The NLRS said lamb quality was not to the standard of previous weeks, with more lambs showing signs of dryness. There were mainly heavy lambs penned along with a handy run of trade weights. Store lambs were limited in supply. All the usual buyers operated in a cheaper market.

The NLRS said the lambs were generally plain quality with many mixed and small pen lots. Not all the usual meat buyers attended and the market was cheaper by up to $15.

Bidding reached $170 for a line of export lambs estimated to have a carcase weight of 29-30kg with an $8 skin value. The supply of quality heavy lambs was limited and there was only a handful of sales over $140.

The bulk of the yarding comprised lighter weight lambs, including several pens of Dorpers. Most sales ranged from $60-$90. Some of the light lambs that sold to restockers recorded the strongest results. The supply of quality domestic and export slaughter lambs was limited, with the top end of the lambs from $120-$140. On a carcase basis the better quality lambs trended between 500c/kg-540c/kg cwt. Plainer and lighter lambs sold at lower carcase prices.

The mutton sale was also cheaper. A few pens of heavy crossbred ewes sold from $85-$110, while the medium weights ewes to slaughter made from $60-$85.