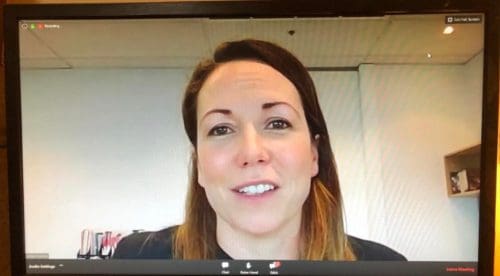 VICTORIA’S Minister for Agriculture Jaclyn Symes has offered no insight into how the state’s red meat processors might progress to lower COVID-19 workforce restrictions as the spring lamb turn-off begins.

Sheep Central asked the State Government three days ago how regional and metropolitan red meat processors could have their current 33 percent cuts in peak workforce levels relaxed, if at all, after September 13.

Despite Premier Daniel Andrews last Sunday releasing a roadmap out of COVID-19 lockdown restrictions for other industries and the community, the State Government has refused to state how or when the processor workforce restrictions might be eased.

A roadmap document indicated the seafood and meat processing sector would continue to be ‘heavily restricted’ with workforce restrictions after 13 September and potentially up to November 23, when it could move to a ‘restricted’ status after November 23. But how the regional or metropolitan processors could gain a less restricted status is unclear, except that density quotient, staff level reduction and patron limits would be applied.

Mr Andrews yesterday said the current 33pc cut on peak workforce levels imposed on meat processors would remain “largely in place for the foreseeable future” and the government was in “active discussions” with industry on how restrictions might change. He previously said processors would not be able to return to pre-COVID behaviours and practices.

Under the current Stage Four lockdown restrictions, meat processing facilities, except poultry plants, must continue to operate with not more than 67pc of their daily peak and daily total workforce capacity. Businesses with 25 workers or less are exempt, but plants with more than 25 workers are required to work at two-thirds of their peak workforce capacity or to 25 workers, whichever is higher.

Ms Symes today was only able to say that the government was “working with industry to protect communities against COVID-19, without compromising animal welfare as we move through the steps in the reopening roadmaps.”

“Meat and seafood processing businesses are a critical part of the agriculture supply chain, and I know we’re coming into one of the busiest times of year,” she said.

“We are working with industry to explore how we can continue to protect communities against COVID-19, without compromising animal welfare as we move through the steps in the reopening roadmaps.

“I acknowledge and thank the meat industry for the significant work they’ve already undertaken to reduce the risk of transmission in their workplaces and to keep our supply chains going.”

Unchanged situation for processors is a concern – SPA

However, the unchanging situation for Victorian abattoirs is raising concerns with the peak body Sheep Producers Australia and the prime lamb industry.

SPA chief executive officer Stephen Crisp said the body has become increasingly concerned by the unchanging situation for abattoirs in Victoria and the inability to work out what is required to get to 80pc workforce capacity.

“It looks like there is no restrictions being lifted for a couple of weeks and even after that point it still seems uncertain as to what people will be able to do.

“It is getting to be a major concern, especially as we go into Spring and the pressure is starting to come on with lamb numbers,” Mr Crisp said.

He said it was “entirely appropriate” and “more than fair” that lamb processors be allowed to operate at 80pc peak workforce capacity as the chicken industry has been allowed to.

“The whole of the meat industry is after what evidence or science is the government basing these differences on.”

Mr Crisp said the Victorian Farmers Federation and Australian Meat Industry Council have identified the inconsistencies in placing harsher conditions on a vital agricultural and manufacturing industry compared with the rest of the economy.

“Sheep producers and abattoirs are asking for a common sense set of parameters to be applied for the abattoirs and the regions in which they operate – having had little or no COVID-19 cases.

“Protocols are currently in place to ensure that the workforce is not placed at risk,” Mr Crisp said.

“It is time to see the industry operating at an acceptable level, with continuation of the appropriate precautions in place.”

He said COVID-19 was a community problem and common sense should be applied for regional abattoirs in areas where are no COVID-19 cases.

Strong domestic market is vital to the industry

“This is vital, as there has been a softening of some export markets that rely on the food service industry, so we will be seeing an increase in different cuts, as well as volumes available to the local market.

“We must have the lambs processed at the right time to suit the local markets,” he said.

“The VFF has rightly pointed out the issues if lambs need to be held longer than what the market requires.

“Sheep producers have finally seen some relief from drought and are now facing the impacts of COVID-19 on our markets,” Mr Crisp said.

“The industry and supply chain has worked out a sensible, risk-based approach only to be hit with processing restrictions that in part seem unnecessary and inequitable.

“The Federal Government talks about the impact Victoria’s continuing restrictions are having on the Australian economy,” he said.

“In the case of sheep and lamb processing, it is having a real effect on the ability of a national industry to effectively operate as an essential service to feed the nation.”

“And when you’ve got uncertainty launching into a new season’s campaign it can be really really difficult – you don’t know which way to jump at this stage.”

He said it was possible the workforce restrictions had contributed to recent lamb price rises, which might have been stronger, but the new season turn-off of lambs was yet to “fire-up” in the state.

“So therefore I think this recent relative upturn in price is due to supply and demand.”

Click here to read the How we Work Regional Roadmap document.