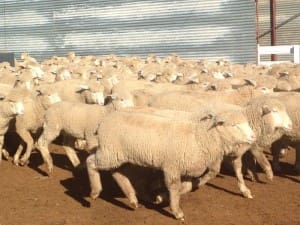 New season lambs were yarded at Carcoar and Wagga in New South Wales, and at Horsham in Victoria.

The NLRS Eastern States Daily Indicators for lamb categories were firm to cheaper this week, especially for light and trade lambs. After Thursday’s sales, the ESDIs for lambs were: restocker 499c/kg, down 3 cents; Merino 525c/kg, no change; light 533c/kg, down 5c; trade 577c/kg, down 5c. The national trade lamb indicator closed at 577c/kg, down 5 cents and the heavy indice is on 578c/kg, down two cents.

The ESDI for mutton finished down 5 cents on 384c/kg and the national indicator is at 383c/kg, down 6 cents.

The NLRS said it was a much plainer quality yarding with a large percentage of tail-end lambs. Not all the regular buyers attended, resulting in a cheaper market.

The NLRS said quality was mixed with more secondary lambs showing the effects of the wintry conditions. Just over 2000 new season lambs were penned, along with was a few extra pens of younger supplementary-fed shorn lambs. Theses drafts offered buyers weight and yield which helped lift prices a few dollars higher for the better finished drafts. There was a slight drop in weight across the extra heavy lamb category with fewer lambs weighing above 26kg cwt.

The usual domestic and export buyers competed in a solid market. Secondary lambs suitable to restock or feed on were in short supply, with only limited restocker activity and no lot feeder competition.

Several drafts of exceptional Merino lambs were bid on by export and domestic processors. Well-finished Merino trade lambs made from $121-$154 and a pen of extra heavy Merino lambs made $168.20. Light lambs sold to processors for $6-$7 less, at $72-$114. Heavy export lambs were in shorter supply, aiding the slightly dearer trend. Heavy and extra heavy lambs sold from $154-$197 to average 585c/kg.

The NLRS said it was better quality yarding of mainly medium trade weight lambs with more finish in an overall mixed offering. More buyers attended although not all operated at times. These included an extra domestic processor and a restocker from Ballarat, creating more competition on light weight and light trade 2 score lambs.

The NLRS said lamb quality was average, with most weights and grades on offer. Most of the usual buyers attended, but with the limited numbers available, not all were fully active. Lambs generally sold a few dollars easier, with the better presented light trade weight lambs a few dollars better in places.

In Western Australia at the Katanning saleyards on Wednesday, the agents yarded 3000 lambs, 3360 fewer than last week, and 3589 sheep, 580 more than last week.

The NLRS said it was a very mixed quality yarding of mostly store lambs that sold firm. One processor did not attend the sale, but graziers bid strongly on store lines.

In Queensland at the Warwick saleyards on Wednesday, the agents yarded 1990 lambs and hoggets, and 370 sheep.

The Warwick Livestock Selling Agents Association said the market was firm on last week’s rates for all descriptions. The top-priced lambs weighing 58.6kg lwt made $149 for Clifton producer, Gerard O’Leary.