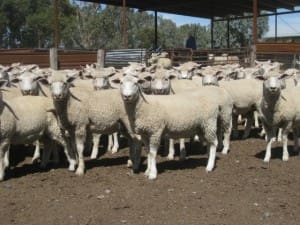 These 18kg cwt White Suffolk cross lambs at Violet Town in Victoria sold for $104 on AuctionsPlus this week.

Processors with forward supplies of lambs and more secondary quality drafts from the escalating seasonal turn-off dragged prices down in eastern states saleyards and over-the-hooks early this week.

The best quality trade lambs have been least affected by the saleyard price decline. But mutton prices have also suffered, with some buyers not operating at centres. The skin price drop is affecting sheep and lamb rates.

Eastern states agents report that export and domestic processors with two to three week supplies of lambs booked in for slaughter have been unwilling to quote forward prices and restocking confidence has fallen due to the lack of contracts.

Supplies and market could change in April

“I just think it is short term at the present because of what has been happening in the north (with numbers coming in) and quite a few of our exporters have 2-3 weeks kill in front of them.

“If you can organise three inches of rain across Australia; that will fix it quicker.”

With lambs getting heavier, producers are being forced to “bite the bullet” and turn-off drafts for the saleyard and OTH spot prices being offered, he said.

“It will be an interesting three weeks and then all of a sudden the flush will be gone and we will be wishing we had a few lambs around us.”

“We are not too bad for feed and water, but the biggest trouble with heaps of dryland lucerne is that you have 24kg lambs and then all of a sudden they are 30kg before you know it.”

Mr Leitch said he cannot get any export or domestic processors to commit to forward contracts on lambs. Early forward contracts gave restockers confidence to buy store lambs, but demand for restocking lambs has “pulled right back”.

“Three weeks ago there would have been 12-14 buyers trying to buy restocker lambs in Bendigo – on Monday there was one.

“They can’t get a forward contract and where the price is heading at the present they are not willing to take the chance,” he said.

Landmark auctioneer at Dublin Bill Warton said trade and heavy lamb market has come back $30-$40 the past month, with trade weights least affected.

“All the meatworks are full of lambs – you can’t a booking to get lambs killed for at least 2-3 weeks,” he said, with major export processors unwilling to quote a forward price for lambs.

“A lot of lambs on Monday were only 500c/kg and I think this will be the case until they get this backlog cleared out.

“I think it could be 2-4 weeks before see much change in the job.”

Mr Warton said the region’s producers were running out of feed and it was not economical to feed grain at the current prices.

“I can’t see that the numbers are going to drop, because the vendors are saying we are going to sell our lambs, we are not going to feed them.”

In Victoria, the NLRS said the majority of contributors made downward adjustments to lamb over-the-hook rates this week, with trade weight lambs declining an average of 15c/kg cwt. Light and medium weight mutton rates were marginally lower week-on-week.

In SA, the NLRS said over-the-hook lamb rates were lower across all categories this week, with trade weight lambs topping at 560c/kg cwt. Mutton rates increased, with tops of 320c/kg cwt for medium weight carcases.

In Western Australia, NLRS quoted the over-the-hook lamb and mutton rates as unchanged.

Tasmania’s over-the-hook rates for mutton and lamb were unchanged this week, according to the NLRS.

The NLRS said it was a plainer quality yarding with lambs presenting in dry condition as seasonal conditions remain dry. Most of the regular buyers competed in a cheaper market.

The NLRS said the quality of the lambs was fair to very good, with heavy lambs well-supplied. The trade were also well catered for. However, the quality of the lambs suitable to restockers was plain. All the usual buyers attended. Market trends through all classes of lambs were cheaper and quality was the major contributing factor in the fall in price for lambs to restockers.

Included in the sheep offering was a large line of young Merinos. Overall quality was fair to good and included a number of heavy lines. Market trends were firm to cheaper with weight and skin value variations contributing to the cheaper prices.

The NLRS said lamb quality remained similar. There were still good numbers of well-finished lambs offered though more of the offering showed signs of dryness. The usual buyers competed in a cheaper market that varied on quality.

At the Inverell saleyards on Tuesday, the agents yarded 1956 lambs and 1540 sheep.

The NLRS said the yarding consisted of a good supply of trade weights and several pens of heavy lambs, along with some light plain lambs. Quality was fairly good in a market that was easier compared to the sale two weeks ago.

The light trade lambs were less affected than the trade and heavy weights, which were down by $10-$15.

The yarding of mutton was made up of several pens of heavy ewes and wethers in full wool, with some light plain sheep. Overall the market was down by $10.

The NLRS said there was a good selection of heavy export lambs, while quality and finish was more mixed over the trade and light weight lambs. Processor competition was much weaker compared to the last sale held a fortnight ago.

Most lambs averaged $10 easier, however falls of up to $20 were recorded for some of the heaviest export lambs and the plainer trade lambs around 18-20kg cwt. Prices varied on quality, with the better bred and nicely presented trade and store lambs holding their value the best. The secondary and small pen lots of plain and mixed lambs were severely discounted at times.

While the usual buyers were present, feedback suggests most meatworks currently have plentiful supplies of lambs around them. Also affecting the market this week was lower skin values, with buyers working on returns of $3-$6 for the cleaner skins over 2.5 cm, with no value put on short-wool and recently shorn pelts.

The market did reach a top of $160 for a pen of export lambs, estimated to have a carcase weight of about 32kg. However, sales over $150 were limited to just a few pens. Prices for light weight lambs fluctuated depending on quality and finish. Restockers from Swan Hill, Ballarat, Finley and the local Bendigo area still gave solid support to the better-bred lines of recently shorn store weights, with lines making $85-$92.

The cheaper trend flowed through into the mutton sale, some buyers did not compete. Prices were significantly cheaper compared to a fortnight ago, with the general run of sheep costing processors an estimated 290-320c/kg cwt, though odd sales of Merinos were higher. Only very heavy ewes, or Merinos with a big fleece, made over $100.

The NLRS said the quality of the trade weight and heavy lambs was good, with fewer heavy lambs penned. The usual buyers operated in a generally cheaper market with lambs selling $5-$10 easier than last week.

Some quality pens of light trade weight Southdown cross lambs sold at near firm levels, with trade weight lambs lacking finish being the most affected.

Sheep quality was not as good over the ewe portion. Restockers purchased reasonable numbers of wethers from $59-$88. Heavier sheep sold from $5-$10 easier, with light and medium sheep, plus the wether offering, selling close to firm to $5 easier. Light weight 1 and 2 score sheep sold from $38-$75.

The NLRS said the generally good quality crossbred lambs sold to erratic bidding from a full complement of local and interstate trade and processor buyers. Merinos were more plentiful and prices hovered around those attained last week. Feeders and restockers were very cautious and bid specifically on light weight late drop lambs.

The NLRS said the usual trade and processor buyers were present, but not all operated. The yarding generally lacked weight and condition, with large lines of lambs in store condition. A number of restockers bid strongly as the market sold to a softer trend.

The NLRS said sheep and lamb numbers halved with the advent of wide spread rain. Quality was generally plain, with most lambs again light weight secondary drafts. The few prime lambs yarded were better than in recent yardings. The heavy lambs sold $3-$5 better and the trade lines were firm.

All buyers were present but there was no live export activity. Wether and ram prices remained firm on last week. Light store lambs to restockers, including moderate numbers of Merino lambs, made $10-$75 to remain firm. Light lamb to air freight processors and feeders were also firm, with most prices from $60-$86.

Light weight mutton drafts made $35-$62, with the 2 score mutton to processors making $60-$75 and finishing $2-$4 dearer. Better conditioned drafts, including the heavy weight supplies, sold from $69-$86 to be $1-$3 dearer at 295c/kg cwt. The ewes included some good medium and heavy weight drafts but most were in light condition.

Prices rose $1-$3 on quality mutton and $2-$4 on light boners. Wether prices were firm without live export activity. Export weight wether drafts made $65-$110 to restockers and processors and were firm. Lighter weight and store wether categories made from $68-$89 to also remain firm. Young rams were also $2-$4 dearer and ram lambs made $84-$96. Processors and export feeders paid from $53-$63 for young rams and the old rams sold firm to processors from $5-$55.