Lamb and mutton prices climb on back of reduced offering 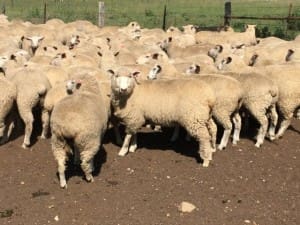 These 18kg cwt White Suffolk cross lambs at Rylestone, NSW, sold for $112.50 on AuctionsPlus this week.

Lamb prices climbed up over 600c/kg cwt and mutton topped 400c/kg in some eastern states saleyards as processors bid on generally reduced offerings at major centres early this week.

After the close of Tuesday’s saleyard sales, the NLRS quoted all of its Eastern States Daily Indicators for lambs as moving up. The category indicators and changes were: restocker, 571c/kg cwt, up 10 cents; Merinos, 484c/kg, up 5 cents; light, 524 cents, up 12 cents; trade, 534 cents, up 8 cents. The national trade lamb indicator was up 2 cents to 536c/kg and the heavy lamb indice was up 7 cents to 541c/kg.

The ESDI for mutton closed up two cents at 353c/kg and the national indice finished on 354c/kg, up three cents.

In NSW, the NLRS said over-the-hook rates continued to ease in all lamb categories this week, with trade weight lambs averaging from 521¢/kg-531¢/kg cwt, in line with saleyard trends. Mutton prices remain unchanged.

The NLRS said it was a mixed quality yarding of lambs with some good runs of heavy weights and only limited numbers of ideal trade weights. There were also fair numbers of lightweight crossbreds and Merinos.

Solid demand for quality at Tamworth

The NLRS said lamb quality was fairly mixed with some good trade and heavyweights penned, but quality did tail off. The regular buyers attended.

Demand for good quality lambs in all categories was solid. Good quality trade and heavy weights remained firm. There was weaker demand for secondary quality lambs and these sold to cheaper trends. There was good restocker competition for lambs forward in condition and carrying a bit more weight.

The plainer quality light and very light weight lambs sold to a cheaper trend, with quality variations accounting for a large price change in the lightest weight category.

There was good demand for heavy weight sheep, with the market trending dearer. The light and medium weight sheep sold to a slightly cheaper trend, with some quality related price change also.

The NLRS said lamb quality was similar to the previous sale, with good numbers of finished lambs and plainer secondary types. The usual buyers competed in a fairly steady market that varied with the quality offered.

The NLRS said lamb quality was generally of a plainer standard compared to a week ago, with less well-finished trade weight pens offered. There was little price change for heavy lambs with not all the usual export companies operating.

The market reached a top of $172 for lambs estimated to weigh about 32kg cwt with an $8 skin. There were only a few pens sold above $160. However, bidding did intensify for trade and light weight slaughter lambs and these categories were dearer, with the lightest and smallest lambs recording the biggest price gains.

Bidding for light lambs weighing less than 18kg cwt was very strong from processors and restockers, with most sales $10-$12 dearer. Most light lambs sold from $85-$100, averaging over $90 at very high carcase prices. The main restocking orders were from Swan Hill, Finley and Kerang, with some local Bendigo competition.

The better bred and finished trade lambs averaged $2-$5 dearer at $130-$145, with some of the major domestic buyers stepping up in weight this week. The lead drafts of trade lambs were estimated at 540c/kg-570c/kg cwt. Bidding for secondary trade lambs was more consistent and most also sold dearer, from $106-$125. In contrast, exporter bidding remained subdued and heavy lambs weighing 28-32kg cwt were firm to $2 cheaper at $153-$163, or an estimated 500c/kg-530c/kg cwt.

The lower number of sheep yarded combined with strong processor demand resulted in a much dearer mutton market compared to a week ago. Most sales averaged $7-$12 dearer, with some lines recording greater price gains. Pens of extra heavy crossbred ewes sold from $90-$134 and a stand-out pen of big longer wool Merino wethers estimated to have a carcase weight of 38kg topped at $139. Medium weight ewes generally made from $70-$90. Quality mutton ranged from an estimated 340c/kg-400c/kg cwt.

The NLRS said lamb quality was again good, but there was a smaller offering of heavy lambs. The usual buyers operated keenly on the better-presented trade weight and heavy lambs selling from firm to $5 dearer on last week’s sale.

The sheep offering included all weights and grades, and quality was average, with more light weight mutton. Not all the usual buyers operated fully. However, most sheep sold to a dearer trend to be a few dollars up on last week. In places selected lots made to 410c/kg cwt.

The NLRS said more store lambs were yarded. The usual trade and processor buyers were present and prices fluctuated throughout the market. A larger restocker presence caused prices for lighter lambs to rise. The heavier lambs were fully firm to the trade while unknown seed status again caused significant price falls in some pens.

The NLRS said there was a reasonable number of crossbred lambs and a solid supply of store Merino lambs, many of which were very light weight. Quality was mixed, with reasonable numbers prime lambs. Competition remained solid from a full field of buyers with prime lamb prices lifting.

Mutton prices varied but finished firm to slightly cheaper on last week. Hogget, wether and ram supplies were moderate and there was a reasonable number of heavy ewes. Ewe prices were lower week-on-week.