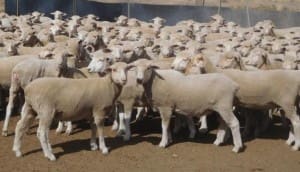 The Wagga Wagga saleyards in New South Wales yarded 42,000 lambs this week, 18,000 more than last week, but more other eastern states centres offered either fewer or only slightly increased numbers.

With rain falling across the country before sales this week and more forecast over the weekend, most domestic and export processors operated mid-week, bidding most keenly on well-finished supplementary fed lines, but also seeking any drier secondary drafts with weight.

Competition was keenest for suitable trade lambs or heavier lambs with finish and yield also suitable for domestic orders. Heavy lambs sold up to $18 dearer at Carcoar.

The mostly plain quality yarding of mutton had only odd pens of well-finished sheep. Light weight sheep sold around firm and the few better sheep were $5-$9 dearer. The 2 score ewes sold from $20-$74. The better 3 and 4 score crossbreds made $60-$114 and Merinos sold to $109. Merino wethers sold to $96.

The NLRS said lamb quality was very mixed, with some good lines of well-finished lambs and plainer drier types. The usual buyers competing in a dearer market.

Most of the sheep were Merinos. Quality was very mixed and prices lifted. Merino ewes sold from $74-$104 and crossbred ewes made $74-$107.

The NLRS said despite the surge in numbers, lamb prices continued to track at a steady pace as more supplementary-fed lambs take the place of grass-finished stock. Shorter skinned supplementary-fed lambs and lambs finished on lucerne attracted the best competition. All major export and domestic processors operated fully due to concerns of tightening supplies should heavy rain eventuate over the weekend.

Well-bred lambs benefited from increased producer competition, both locally and from interstate, as some understocked producers reacted to the forthcoming rain. Lambs with weight and frame sold up to $6 dearer at $87-$116. Merino trade lambs were keenly sought, making from $98-$137.20.

The NLRS said lamb and sheep numbers declined after the recent rains of around 50mm in the district. Lamb quality varied from good to fair, with less weight on average.

As with last week, processors and restockers were strong for lighter weights as they remained firm, with very light lambs at times $20 dearer. Medium and heavy lamb prices jumped $5-$10 higher.

Local and Naracoorte restockers paid $24-$80 for lambs, but found it difficult to compete against the processors for numbers. There was also some activity from the local restockers paying $51 for Merino lambs and $59 for light Merino wethers.

The NLRS said most of the regular buyers operated in the generally dearer market.

Heavy Merino lambs in a big skin sold to $117.50 and heavy shorter fleece lambs made to $128. Restocker activity was limited, but they paid to $98 for lambs.

Ouyen lambs up to $10 dearer

At the Ouyen Livestock Exchange on Thursday, the agents offered 5383 lambs and 2102 mutton sheep.

These sold to stronger demand with prices for lambs firm to $10 dearer and mutton rates $5-$10 dearer.

In Queensland at the Warwick saleyards on Wednesday, the agents yarded Warwick Selling Agents yarded 1291 lambs and hoggets, and 264 sheep.

The market was quoted firm on last week’s rates for the smaller yarding of sheep and lambs.