Irish collie sells for more than $A16,800 in latest Skipton mart sale 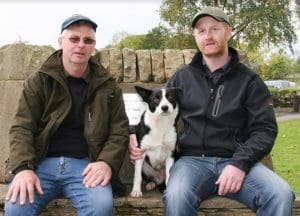 Organisers said it was the most successful day ever at the UK’s leading working dog sales venue, which achieved record turnover and an all-time record average for broken registered dogs and bitches of £2.694 or A$4546.

Moreover, the overall average of £3,294 for the 26 broken registered bitches sold was the first time an individual section had averaged over £3,000. The sale attracted another three-figure turnout of 120 dogs – 78 fully broken and 42 in the unbroken pen – from all parts of the United Kingdom and Ireland.

Many broken dogs were successfully sold at under 1000gns and up to 2000gns at the October 13 sale, as the seasonal fixture once again provided a ready supply of dogs and bitches all day. 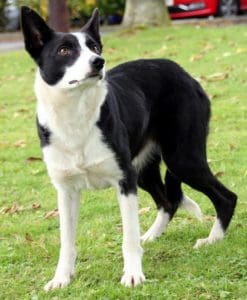 The top-priced dog was a 20-month- old black and white bitch, Flo, from top Irish triallist Michael Gallagher, of Armoy in County Antrim. His only entry on the day, Flo is by Littledale-based Ricky Hutchinson’s celebrated International Reserve Supreme Champion Sweep.

Sweep has bred multiple trial winners across the globe, out of fellow County Antrim handler Chris McNaughton’s Mist, also the dam of Val, a finalist as a two year-old in the hands of Mr Gallagher in this year’s World Sheep Dog Trials, staged in the Netherlands in July. Mist is by the legendary trials dog, Sid, bred in County Donegal by James McGee, of Glencregg Sheepdogs in Creggan, Ballybofey, out of another Flo, who finished third for Mr Gallagher in the 2015 Supreme, and is herself a daughter of Cap, the Irish handler’s 2010 International Supreme Champion.

“Michael is one of the top handlers and always produces good quality dogs.

“I’d seen Flo on YouTube and was very impressed, so came down in the hope of getting her,” Mr Sutherland said.

About 10 years ago Mr Sutherland represented the Scottish trials team and is set to make a welcome return to the trials field.

Also taking credit for the top price performer was Mr Gallagher’s American-born fiancée, Tierney Graham. She, too, runs dogs and the couple first met when her husband-to- be, who had a two year and highly successful trialling stint across the Pond several years ago, was among the judges in the US National, in which Tierney, then living in Seattle, Washington, was competing. She has since joined Michael in Ireland and the dog-loving duo make a formidable team.

Ireland was also responsible for the second top price 6,000gns dog, Floss, a three-year- old black and white bitch from Colm Doherty of Tirbracken in Londonderry, who has already proved herself on the trials field, finishing third in the North of Ireland nursery final, along with open placings.

Floss is by James McLaughlin’s Dan (Ben), twice Irish National champion, Supreme runner-up and also winner of “One Man and His Dog,’ out of Queen, who is owned by Mr Doherty&#39;s brother,  Paul Doherty, of County Donegal. Floss will go to work with her new owners on a North Yorkshire sheep farm.