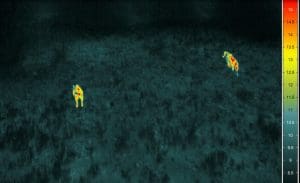 INFRARED technology was employed to help eliminate thousands of feral pigs across the Riverina, Murray and western regions of New South Wales.

Across an area of 750,000 hectares in the Riverina, Murray and Western Local Land Services regions, 5644 pigs, deer, feral cats and foxes were eradicated.

The aerial shoot, which resulted in up to 70 percent of the feral pig population being culled, complemented other control measures such as ground baiting and trapping that Local Land Services, along with local landholders and community groups, have been undertaking.

The areas for the shoot were identified from aerial surveillance that has been collected annually for the past three years as part of the Western Riverina Pig Project. This data pinpointed the highest priority areas where densities were found to be as high as 170 pigs per square kilometre. 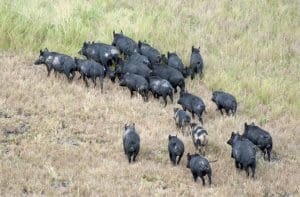 Feral pigs on the run in New South Wales.

Manager of biosecurity and emergency services, Michael Leane said it was an opportune time to carry out the targeted program.

“There’s not many silver linings to drought conditions but it’s an ideal window to achieve significant knockdowns when it comes to pest control.

“The pigs are really poor at the moment and we’ve noticed a huge drop in condition since last year, so this was a good chance to carry out this shoot and it was pleasing to see the results that we did,” Mr Leane said.

“Programs like this rely on other strategic methods including ground trapping and baiting to ensure optimal results are achieved.”

This program was coordinated by Local Land Services and involved the NSW National Parks and Wildlife Service, local community groups and landholders.

The program utilised funding from the 2018 Pest and Weed Drought Funding Program.