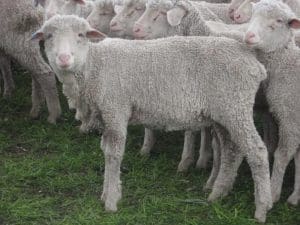 On Monday, the National Livestock Reporting Service’s Eastern States Daily Indicator for heavy lambs rose 8 cents to 652c/kg and then another 8 cents to 660c/kg on Tuesday, up 41 cents week-on-week and well above the previous record of 646c/kg in February 2011.

Extra heavy lamb prices of up to $223-$230 in New South Wales weren’t quite equalled in Victoria, with only a few quality heavy and extra heavy lines making more than $200. In all states, more lambs in all slaughter categories are making above 650c/kg cwt, with many over 700c/kg in the light and trade weight pens. In NSW, the trend above 700c/kg has continued into the heavy lamb category.

Driving the heavy lamb rates is the overall tighter quality supplies, limited direct sales and strong domestic demand for any well-finished lambs 20-28kg that are also suitable for export processors.

Dubbo agent Cleve Olsen said supplies of heavy lambs were short in the region and there weren’t many further south either. Dubbo agents drew for 27,000 and yarded 23,000, though this was an increase of 9795.

“Later on there probably will be a few about, but at this point in time there is a generally short supply of sheep and lambs.”

Export demand was still strong but up to $226 for good lambs was “plenty of money”, he said.

“They haven’t been paying that money all the year and you will find they have probably got caught out.

“I think the lambs are definitely in short supply and especially the right article.”

Mr Olsen said the “window of opportunity for very top money” was very short and had been helped by rain this year.

“If only meat companies could understand that if they could give a grower a fair dinkum idea of what they will paying in June and July….”

Mr Olsen believed the forward contracts put out for July-August would need to be adjusted if processors wanted to get lambs, with lambs making more than 700c/kg cwt.

MLA market information manager Ben Thomas said the surge in lamb prices was all on the back of shortening availability and strong producer confidence after the widespread rainfall throughout May and June.

“Lamb supplies are expected to remain lower than year-ago levels throughout the winter months which should support prices, before the usual seasonal flush in spring.”

Mutton prices were firm to up to $20 cheaper in NSW, mostly on quality and helped at times by fleece values, but rates were firm to up to $10 dearer in Victoria. After Tuesday’s sales, the ESDI for mutton fell 3 cents to 413c/kg cwt, and the national mutton indicator closed on 412c/kg, also down 3 cents. The current ESDI for mutton is well below the March 2011 record of 481c/kg.

NSW and Victorian processors lifted over-the-hook lamb rates dramatically this week in an attempt to flush out direct supplies. Rates for Merino lambs lifted the most, from 20-37c/kg.  In New South Wales, the NLRS said over-the-hook lamb indicators for trade and heavy weight lambs were up to 620c/kg cwt. Mutton rates remained stable, with tight supply a factor.

In Victoria, the NLRS said most lamb over-the-hook indicators moved higher this week, with trade weights up 13c/kg on average to 627c/kg cwt. Mutton indicators were unchanged, with medium weights averaging 353c/kg cwt.

This week’s NLRS OTH quotes for Western Australia were not available when this article was published.

The NLRS said lamb quality was good, with plenty of heavy and extra heavy lambs. Trade weights in good condition were limited and there were good numbers of store and light processing lambs available. All the usual buyers operated in a dearer market.

The NLRS said lamb quality was mixed, but there were some excellent pens of extra heavy lambs. The usual buyers competed strongly for trade lambs, lifting prices $6-$9.

Tamworth lambs up to $20 dearer

The NLRS said there was another small offering as a result of rain and dwindling supply. The quality and condition of the lambs offered to the usual buyers was fairly mixed.

Demand for well-finished lambs in all weight classes out-weighed supply, resulting in dearer trends for trade and heavy weights. Restockers were active on the plainer condition lambs, but there was a drop in quality. The best of the heavy weight lambs sold up to $20 dearer. There was not a lot of difference in the market for the small number of sheep offered.

The NLRS said lamb quality was similar to previous sales, with good numbers of well-finished lambs. More plainer store Merino lambs were offered and most returned to the paddock. The usual buyers competed in a fairly steady market.

Sheep quality continued to be very mixed, with a good number of heavy ewes and some lighter types. Prices remained strong, with Merino ewes making $77-$165. Crossbred ewes sold from $77-$158. Merino wethers made $76-$141.

The NLRS said it was a mostly plain lamb yarding for the usual buyers, plus a major domestic buyer who was absent a fortnight ago. The market matched more recent sales, with some significant price gains for trade weight lambs displaying reasonable carcase finish. Prices for any of the very plain score 1 and 2 small lambs fluctuated, mostly around quality.

The single pen of extra heavy export lambs made $190. Heavy trade weight lambs sold to the best demand at $145-$175, with the best pens making over 650c/kg cwt. Most Merino lambs were in plainer 2 score condition with shorter skins and prices were similar to a fortnight ago.

The limited yarding of sheep had some pens of heavy crossbred ewes that sold strongly from $115-$150. The better presented Merino ewes made $104-$125. On a carcase basis, the best mutton made over 400c/kg.

The NLRS said buyer competition was much stronger for a smaller and plainer yarding of lambs.

Most sales of domestic slaughter lambs averaged $5-$15 dearer, with some of the plainer conditioned lambs gaining up to $20 as bidding for secondary pens was dragged higher by the intense demand.

Extra heavy export lambs weighing more than 30kg cwt were a few dollars dearer at up to $212. Demand was strongest for lines weighing from about 20kg-28kg cwt which benefitted from both domestic and export bidding, with buyers paying to $189 for lambs destined for a local kill.

There was only a limited supply of extra heavy lambs and sales fluctuated from $178-$212, depending on type, quality and the number in a pen. There were only two sales over $200. The best pens of heavy trade lambs sold from $156-$189 and lighter trades made $125-$145. On a carcase basis, these lambs were estimated at 645-670c/kg, with odd pens over 700c/kg. The strong demand carried through onto the plainer lambs which were significantly dearer than recent sales based on fat cover and carcase quality.

Merino lambs were yarded in reasonable numbers and the best trade weight grain-supplemented lines sold from $133-$168, with most over 600c/kg. Plainer and lighter fat score 2 Merino lambs made $80-$125. The very light lambs under 12kg were very plain and this was reflected in prices, as few were suited to restocking.

Most weights and grades of mutton sheep sold dearer. A stand-out line of extra heavy full wool Merino wethers which had been on grain made $165. Heavy crossbred ewes sold from $109-$135. The best lines of Merino mutton trended above 425c/kg cwt.

The NLRS said lamb quality was average, with several pens of heavy lambs offered. The usual buyers operated strongly in a dearer market on the trade weight and lighter lambs, with heavy lambs a few dollars easier. The better covered heavier trade weights sold from $148-$171 at around 665c/kg to be $1-$5 up on last week. Heavy lambs sold to $198.

The NLRS said the mixed quality yarding of crossbred and Merino lambs sold to very strong trade and processor competition.

Light weight 3 score crossbred lambs lifted $7 to processors to $115-$126 and averaged 576c/kg cwt. Feeders were very quiet, though one speculated on light weights at $50.

The NLRS said more trade and processor buyers were active, along with a small number of restocker orders. Quality was mixed, with more lambs of better weight and condition, but still a large proportion of lambs showing signs of the winter.

The NLRS said the improved quality lamb yarding had more good heavy and trade weight drafts. The lack of lamb supply had a positive effect.

Hoggets sold $2-$5 dearer, receiving solid competition from the trade to sell from $66-$96. Lines of well-conditioned ewes were offered and prices were $5-$8 dearer, or up to nearly 400c/kg for the much better selection. The best heavy ewes sold from $85-$106. The 2 score processor mutton made $71-$88 and light boners sold from $38-$71 to feeders. The better wethers sold to processors for $90-$112. Rams remained firm, with older types selling to processors for $60-$74 and the better younger types suitable for the live export trade making $95-$98.

In northern Tasmania on Tuesday, the NLRS said 1250 lambs were yarded at Powranna and Killafaddy, 250 fewer than last week, and 700 sheep, 100 less.

The NLRS said with one major buyer not operating, lamb prices were $2-$8 cheaper, though restockers were very strong on all well-bred lines.