Diane and Geoff Allan, Mathoura, bid the sale high price of $440 for the young Yarto ewes.

Retreating from the buoyant highs of 12 months ago when young ewes made to $512, the maidens this year sold to a sale high of $440 per head to average $337.

Such was the consistency and the strength of the demand for the maiden ewe group that three sale lines exceeded the $400/head-plus price tag, and a further 21 lots in a 2021 drop age group were valued by buyers at $350-$390 a head.

While the leading prices achieved by various vendors in this year’s annual event varied widely from $20 to almost $100 a head below 12 months ago, the overall sale average for the entire maiden ewe offering was $20 a head higher than last year – $337 versus $317 in 2021. 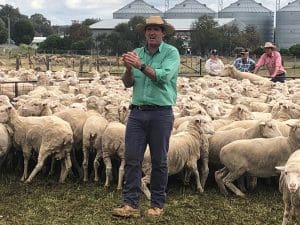 Nutrien auctioneer Geoff McCallum attributed this quirk in the result to the consistency in the overall quality of the yarding.

“It has been a fabulous season across the Riverina, perhaps too good in places, and for a second year running.

“The consistency of penning led to consistent bidding all the way through,” Mr McCallum said.

“It wasn’t the largest crowd we’re even seen at a September sale but we didn’t run out of buyers either.

“There were always two or more parties interested in every pen: there was no holes in the demand at all,” he said.

The drop-off in the lead prices Mr McCallum said was relevant to the decline in the current lower prices being achieved for ewe mutton, wether lambs and wool.

“Wether lamb prices are also back $30/head and the wool market is also softer: so, it’s all relevant.” 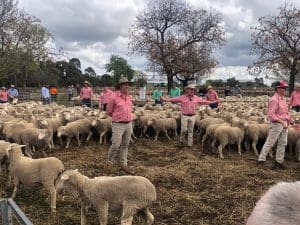 The Elders selling team at the 2022 Hay sale.

Elders Hay branch livestock manager Andrew Lowe agreed there was consistency across the quality of the penning.

“Although cheaper than a year ago it has led to a more even result,” Mr Lowe said.

The larger plainer-bodied ewes he said were sold more consistently upwards of $360 a head while the heavier wool-cutters were more evenly bunched from $330 to a high of $390/head. Watch vision of the opening run of sales:

A further quirk in the young ewe sales results was the fact that lighter, secondary line which would require further conditioning prior to joining were, in most cases, priced equal to higher rates than 12 months ago, at prices of mostly $230 to $320. These were mainly heavier wool cutting types or lines that had adversely been affected by the season, some by local area flooding.

Sales of mature breeders were headed by a price of $320 bid for a line of 2020 drop 2.5year-olds, August shorn and Charinga blood ewes from PM Lawrence and Sons, Albemarle, Ivanhoe, NSW, A similar aged line by the same vendor, but Formosa bred, made $275.

Interest in 5.5 year-old ewes was keen Helen and Greg Rogers, with granddaughter Holly, were all smiles after selling their young Yarto ewes for $440.

The interest in aged, 5.5 year-old ewes was similarly keen, with an offering of nine lots selling mostly from $170-$220. With COVID-travel restrictions of the previous two years lifted, interstate buyers resumed travel from Horsham, Mildura, Bendigo, Echuca and Yarrawonga in Victoria, and from the Wagga Wagga, Narrandera, Forbes, Corowa, Deniliquin and Hay areas of NSW.

The Elders and Nutrien livestock branches also have plans for further sale on October 22.