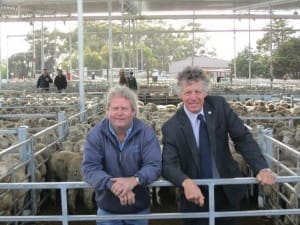 HAMILTON’S new $2.6 million roofed sheep saleyards was officially opened this week as the first stage in a $6.6 million project expected to take 2-3 years to complete.

The second stage of the project will include completion of the overhead roofing across sheep sale yards, more new sheep pens, as well as asphalting of the car park and upgrading of the canteen facilities.

Cr Dark said just under half the sheep pen area in the saleyards had been covered with the saw tooth roof, which was expected to have animal welfare for sheep and occupational health benefits for staff.

“We want buyers to come to our yards with confidence – it is not so much to keep the sheep and lambs out of the rain; it is to keep them out of the hot sun.

“If lambs dry out in the sun, their meat yield decreases.”

The roof’s saw tooth design helped give more natural light, better air flow and it cut down noise, he said.

Saleyard project will be completed

The council is currently awaiting the outcome of a funding application for $2 million to the Federal Government National Stronger Regions Fund that will support completion of the redevelopment project. This funding will be matched dollar for dollar by the council with the total project cost expected to be about $6.6 million.

However, Cr Dark said the council would not be waiting for grant money to complete the saleyard upgrading.

“We’ve done an enterprise review and the saleyards can borrow money and has the capacity to pay it back over 10 years.

“The next stage is already budgeted for,” he said.

There will be at least three stages to the redevelopment, with completion possibly by 2017-18, he said.

“We’re committed to doing the project and there would have to be some very extraordinary circumstances as to why we wouldn’t continue with it.”

The council is also hoping the redevelopment will improve regional competition for sheep and lambs, lift yardings and reduce reliance on town and bore water through harvesting of water. The Hamilton Regional Livestock Exchange is one of Australia’s busiest, with about one million sheep and 50,000 cattle sold annually.

Cr Dark said agriculture is the backbone of the shire.

“This is a project I’ve been very passionate about because I know how important it is to the future of this region.

“As a council, we will continue working hard towards the completion of this project as it promises huge economic and social benefits for the entire Greater Hamilton region.”