IT was an interesting week on the forward and the spot auction wool markets this week as prices lifted at auctions in Australia.

The week started with the recent pattern of spot and forward interest mostly focusing on the finer qualities. The auction opened steadily, as did the forwards. Forward trading was flat to cash June to December.

Auction prices lifted across the board Wednesday, with the majority of Merino types rising 30 cents at auction and converting almost precisely into the forwards. This simulated the sellers, by apparently reaching their longer-term targets, and gave buyers confidence to keep the curve flat or to a slight carry into the New Year.

It was most pleasing to see both the key 19 and 21 micron contracts trading across multiple maturities out to October 2022. The 19 micron contract generally traded at a premium to cash at between 10 and 20 cents, peaking in April and October at 1660 cents, after starting the week at 1590.

Bidding has remained solid into Friday and is generally flat to cash out to the end of the season. August and September demand looks a little shallow at the moment, but picks up again in late Spring.

Both buyer and grower interest for cover in 2022 looks like being sustained into next week.

Interest in the crossbreds is currently coming only from the buying side, with the market stubbornly rooted around the 500-cent level. 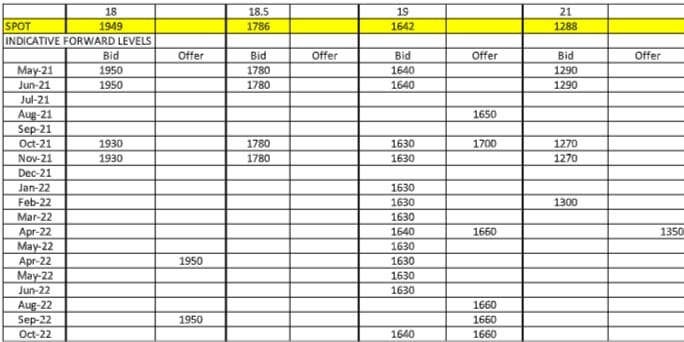