Over the past 10 years, Victorian veterinarian John Steinfort developed the steining process, which uses liquid nitrogen to cryogenically modify breech skin on sheep to increase the bare areas around the side and end of the tail.

“There are lots of benefits to breech management and no animal welfare downsides,” he said.

During the tour, he demonstrated how the amount of nitrogen used could be controlled to get the required result on lambs and weaners. Dr Steinfort will also demonstrated the process at the Balmoral Sire Evaluation Group field day at Coleraine today.

“To do weaners you have to get them in and crutch them before steining,” Dr Steinfort said. 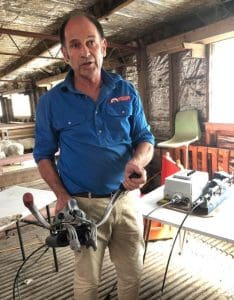 Wool from sheep that have undergone the process is already recognised by AWEX as ‘non-mulesed’ on the National Wool Declaration. Dr Steinfort expected the process would also have benefits for non-mulesed wool growers wanting to modify breech skin to minimise dags, and for ease of shearing and crutching, and it be used on first cross ewe lambs destined to produce lambs for customers seeking non-mulesed meat.

During the tour of four properties, Dr Steinfort showed a small group, which included media, wool brokers, growers and stud breeders how the steining process could be adapted to Merinos of varying skin types.

Karabeal wool grower John Brewis said he won’t go back to mulesing after having lambs steined and was looking forward to non-mulesed premiums for his wool. 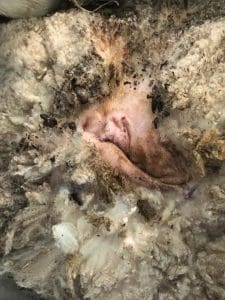 The steined breech of a Brewis Merino weaner.

Mr Brewis’ daughter Coby said the recovery of their steined lambs was significantly better than from traditional surgical mulesing. Although there might be a price difference between the price of steining – about $5 plus GST — versus mulesing, she said there was a lack of a setback in steined lambs.

Dr Steinfort said the cost benefits of steining can be seen in the lack of setback in lambs, better mothering up, higher weaning rates and fewer tail-enders or orphans. His research had shown steined lambs produced 9 percent more wool at their first shearing than mulesed lambs.

Pooginook manager John Sutherland said the steining process was a great example of innovation over time.

“The fundamentals were there and it has just taken a number of years to get it fine-tuned so that it is going to be practical and commercial and gives us the result we need with minimal interruption to the normal life of the sheep.

“I have seen the behaviour of the (steined) animals; as soon as they jump out of the cradle, within 20 feet they’ve put their head down in the grass,” he said.

“The steining process is going to give us the advantage of reducing our management costs over time and reducing the damage that may occur in the breech area during shearing and crutching.” 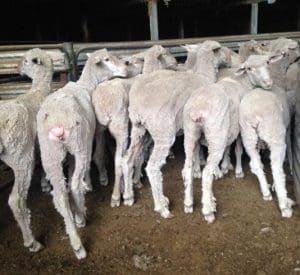 Jig Saw Farms livestock manager Jack Leonard said the area of bare skin around the breech of steined lambs stretched with age. He had also noticed lambs recovered quicker than mulesed lambs and there was less “tail” in the steined mobs.

“They do stay tidier, they don’t have that wool hanging over the back that collects that autumn shit and that helps with the crutching and the shearing.

“There are less cuts, the crutchers do it easier and the sheep are in and out a lot quicker.”

New South Wales wool grower Nick Gay at Cowra said the breech modification from steining on the Jig Saw lambs wasn’t as extensive as he thought it would be.

“But when we saw the photos of the 1.5 year-olds you can see the proper stretching of the skin and it created a bare breech and the vulva, which is what we’ve been looking for.

“So as the sheep matures the steining process seems to evolve and become more pronounced.” 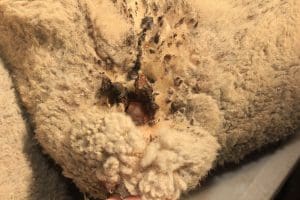 At the Sierra Park at Victoria Valley, Bill Crawford said his grandfather was one of the first growers to cut off excess skin around lamb breeches, before mulesing techniques were formalised, but sheep management had always been as ethical as possible. However, it was almost impossible to get a clean crutch on his superfine lambs, which could make it hard to get crutchers in the future. 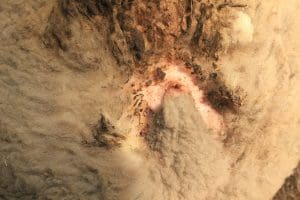 His son Will said the steined lambs suffered no setback and gained weight quicker than mulesed lambs.

“With the premiums for non-mulesed wool (5-10pc), going forward it (steining) will add a bit of value to our business.” 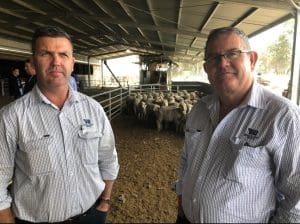 “We’ve been through all the different possible options to mulesing – from intradermals to clips — and none of them have flown.

Jemalong technical services manager David Quirk agreed and said knowing the growing demand for non-mulesed and ceased mulesed wool, growers have to look for an alternative to mulesing.

“If we can get wool on the markets that is non-mulesed, the premiums are there and are growing every day.”

Wool growers on the farm tour recognised that timely supply of liquid nitrogen, especially into remote areas, and the training of sufficient contractors might be limiting factors in the commercialisation of steining. Dr Steinfort said nitrogen supply is going to be a logistical challenge and he has an operational plan to train contractors.