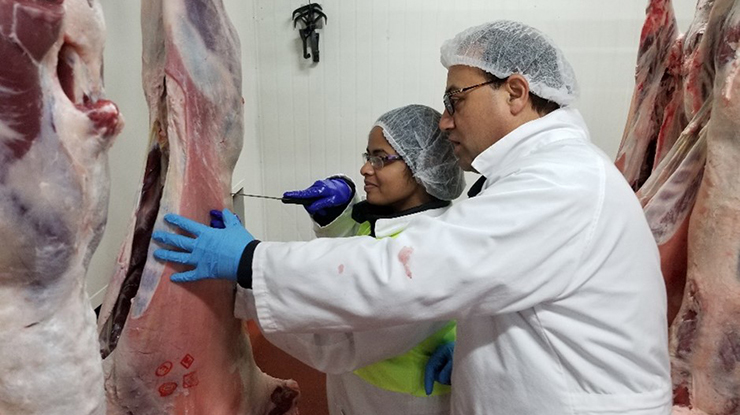 The study found glycogen levels in goats prior to slaughter is a critical area to be addressed by goat producers.

“We found that after 14 days of post-slaughter storage, there was almost no difference between the two age groups – it reduced the shear force and increased the meat tenderness in both age groups,” Ms Abhijith said.

Similar tenderisation was observed in meat within five days of retail display in both age groups, emphasising the potential of post-slaughter storage for a much shorter duration on tenderising goat meat.

Modified atmospheric packaging (MAP) was used in the study and researchers observed a bright red colour in the meat up to five days in the aged and unaged goat meat but observed significant discoloration in the two-year-old group meat at 10 days of storage.

Dr Chauhan said the study reinforces the need for further research to better understand the pathway of the goatmeat supply chain in Australia and also ensuring adequate on-farm nutrition prior to slaughter.

“Goats are ruminants, so a lot of the challenges and factors are similar to sheep, but there is a need to do more R&D, especially if we want to improve goatmeat quality.

“Goats are very sensitive to stress, so it is really important to minimise stress on an animal. If they’re stressed before slaughter, that will impact glycogen levels and overall meat quality.

“Producers and processors will have to work together to reduce pre-slaughter stress and during transport,” he said.

“We know that 90 percent of Australian goat meat is exported, however, demand is increasing for better quality meat, and consistent quality and tenderness is also key if the industry is to popularise and grow goat meat consumption in the domestic market.”

The research found that ageing, in terms of days post-slaughter, has a significant impact on the eating quality of goat meat.

While much research and development has been undertaken into factors that impact the eating quality of beef and sheep meat in Australia for the Meat Standards Australia (MSA) grading system, similar R&D activities for goat meat are in their early stages.

“Little is known about goatmeat quality attributes, as affected by the post-mortem metabolism and post-slaughter storage which may be vital to develop and optimise goatmeat production and processing systems,” Ms Abhijith said.

The study examined 24 wether Boer goats in two age groups – a two-year-old group, and a 6- to 9-month-old group – after slaughter in a commercial processing plant.