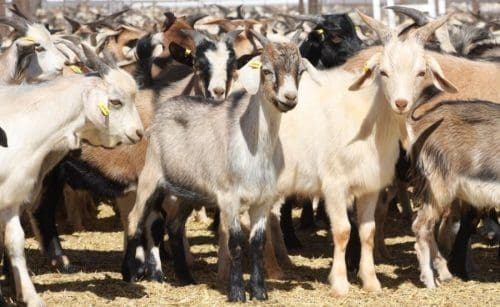 THE Australian goat meat industry is hoping a $3.7 million research project announced last week will fill a data gap on management systems that could help set the sector’s direction.

The project is being funded through the MLA Donor Company (MDC) in partnership with the University of Queensland.

Goat Industry Council of Australia president John Falkenhagen said the project was the largest ever proposed for the industry, will run over several years and seasons and could help set industry direction.

“I think it is going to fill a fairly large data gap in some management data areas that the industry needs.

“To get such a large data set will be pretty good.”

He said GICA is working on a five-year plan for the industry that will help identify a lot of activities that need to happen.

“But I think one of the good things about this project is it is going to help set up some management systems, that’s where I think it will help the most.”

Mr Falkenhagen said there is a massive influx of new people coming into the industry that want information.

“Hopefully, this will help fill some of that information gap.”

MLA group manager for productivity and animal wellbeing, Dr David Beatty, said there is an opportunity to increase the production of goats domestically due to their ability to adapt and thrive in a range of challenging environments.

“We’ve seen changes to many grassland and pastoral systems resulting in increased shrubs and woody regrowth, and goats are primed to take advantage of these environmental changes because of their unique abilities to digest and thrive on low quality diets containing high levels of fibre and anti-nutritional factors,” Dr Beatty said.

“Through this research, the industry will benefit from developing reproductive benchmarks for different production systems, investigating the impact that different management strategies have on reproduction performance and gaining insights into what causes kid losses among goats.”

To address these opportunities and challenges this project will:

Identify the drivers of change in goat production systems

Over five years, data will be captured from a minimum of 15 commercial properties and 15,000 animals. UQ and MLA will conduct regular surveys of producers to determine the drivers of change in production systems, as well as perceptions on the future of the goat industry.

Three focus groups will also be formed to contribute to engagement and development of demonstration farms in each of the production system types: extensive, semi-extensive and intensive.

“As an animal scientist, I am excited to see and document how goat producers apply and adapt standard livestock management practices to suit the needs of their goat enterprises”, Prof Hoffman said.