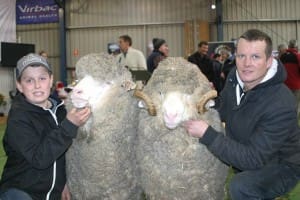 FOUR big wins by one Merino ewe has been the highlight of the best showing season ever for the Glenpaen Merino stud from Brimpaen, in western Victoria.

At Hamilton’s Sheepvention this week, the stud’s two-year-old ewe, the grand champion Merino female at the recent Australian Sheep and Wool Show in Bendigo, outclassed her rivals to take out the top sash again.

Glenpaen stud co-principal Rod Miller said the ewe had now won the quadrella – being grand champion Merino ewe at Bendigo, the Campbell Town Show in Tasmania, the Ballarat show and now at Hamilton.

The ewe will go on to be shown at the Rabobank National Merino Show and Sale at Dubbo on August 23, before being flushed in an ET program. Mr Miller said none of his ewes had ever achieved the four wins in the one year.

“This year is the best we’ve ever done, in showing terms.”

It was the first time the stud had shown sheep at the Sheepvention show at Hamilton.

“It has generally been too hard with the display and the sale rams, but now that the boys – Will and Harry – are getting older, they’ve looked after the show job, so it has been good,” he said.

Judges’ spokesman Pat Millear said the Glenpaen ewe an outstanding sheep with a massive staple, great thickness and very pure, with very white crimpy wool from her topline to her hocks.

The Wurrook Stud recently won the grand champion Merino ram and supreme exhibit at this year’s Bendigo with a different ram.

The winner of the inaugural Fernleigh and Stuart Cuming Memorial Trophy at Sheepvention was the McRae family’s Oakbank stud with an 18.6 micron sport poll ram. Wool judge Peter Blackwood said the ram had well-nourished wool and good staple length was his poll to his tail and to the hock. Carcase judge Andrew Heinrich said the ram had a nice hindquarter. 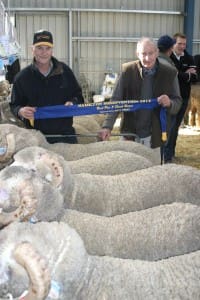 The top Pen of 5 Rams entry and Gordon Uebergang Trophy winner was the Willandra stud from Jerilderie, New South Wales, with a group bought as ram lambs at the One Oak Merino Stud dispersal.